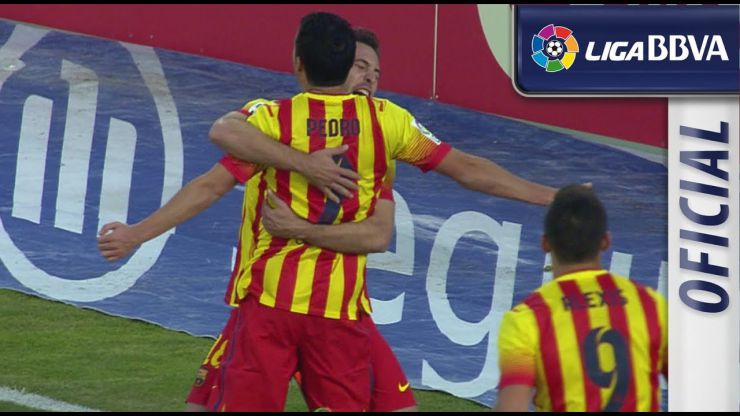 A hat-trick from the Canary Islander and two goals from Fàbregas gave the azulgranas victory despite the fact that Getafe took a 2-0 lead, and Barça are still looking down on the rest.

FC Barcelona pulled off a great comeback against Getafe CF (2-5) on matchday 17 of the Liga BBVA. The Catalonian team, therefore, are still on top of the table despite the home team's best efforts to put their leadership in doubt by going 2-0 ahead in the first fifteen minutes.

Nine minutes were all Pedro Rodríguez needed to get Barcelona back into a match that had quickly become an up-hill struggle. Sergio Escudero and Lisandro's goals in the first quarter of an hourdid not look good for Gerardo 'Tata' Martino's men,who were struggling to find their rhythm. But the blaugrana gradually began to find some confidence and Cesc Fàbregas, Andrés Iniesta and a magnificent Pedro were key players in the visitors' comeback. The striker from the Canary Islands, who was simply brimming with quality, scored a hat-trick that got his team back in the match before half-time.

The Catalonian side put the match to bed in the second half with a brace from Fàbregas, in the space of just five minutes, which proved to be the final nail in the coffin for the home team. The result means that Barcelona end the year in first place in the Liga BBVA, level on points with Club Atlético de Madrid but with a superior goal difference.