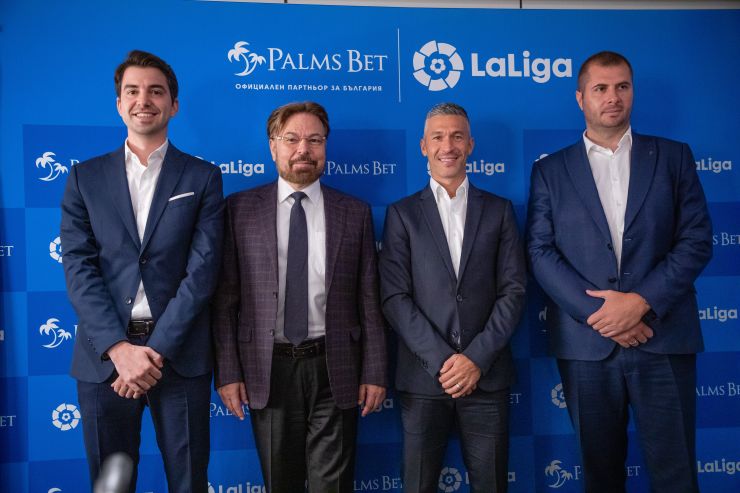 Palms Bet, a leading company in the gaming and entertainment industry and the Spanish LaLiga became partners. The Bulgarian bookmaker becomes the official partner of LaLiga in Bulgaria. The partnership agreement has been signed for the next 2 years.

The partnership was announced at a special press conference at Grand Hotel Millennium  attended by the majority stakeholder in Palms Bet Milo Borisov, the CEO of Palms Bet, Mr Lachezar Petrov, LaLiga reginal delegate Jesús Pizarro Bravo as well as the legend of Spanish football and LaLiga ambassador Luis García.

“I want to thank LaLiga for choosing as a partner. This is a great opportunity for a successful partnership which aims at popularizing mass sport in Bulgaria. The youth nowadays replaces the football field with the telephone and the tablet. Digitalization has its positive side but traditional sport, that all of us used to practice as children, the mass sport – that is what we want to develop together with LaLiga”, said Mr Milo Borisov and added that there is an idea to invite a LaLiga team to visit and play a friendly game with a Bulgarian team.

The Palms Bet CEO Mr Lachezar Petrov explained that the company plans to organize football tournaments in Bulgaria as well as special events for LaLiga fans in the country. They will receive tickets and fan merchandise from Spanish clubs. With this partnership Palms Bet further solidifies its CSR policy”, added Mr Petrov.

For Jesús Pizarro Bravo, regional delegate of LaLiga, the partnership is very important and will provide football fans in Bulgaria with the opportunity to get to know more details about a variety of Spanish clubs, not only the most popular ones.

“We have two main goals – to present the LaLiga brand to more people and to develop mass sport”, said LaLiga ambassador Luis Garcia. He added that LaLiga plans and organizes games with football legends and with this initiative to help fans feel better the emotion of Spanish football.

With this partnership Palms Bet shows its intention for expansion at foreign markets and LaLiga continues its policy of popularizing the Spanish football, following its international strategy.