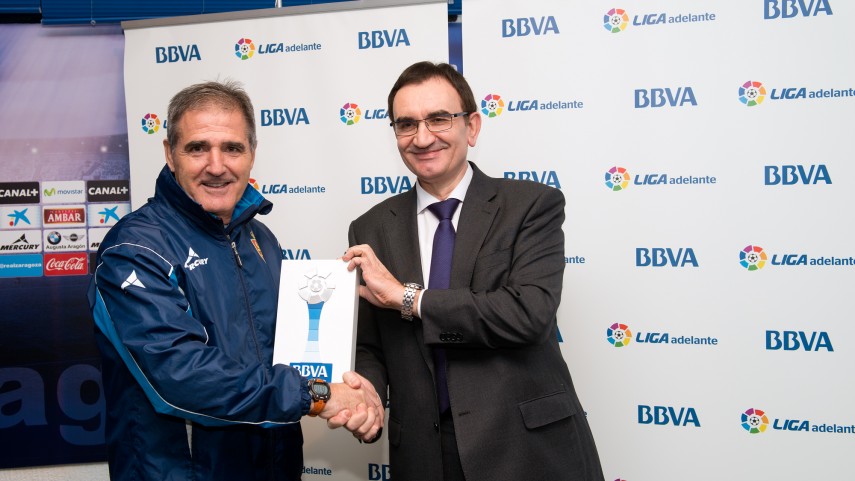 Paco Herrera, the best coach in the Liga Adelante

Zaragoza's manager received the BBVA Award for the best Liga Adelante coach in January, which is presented by the Liga de Fútbol Profesional's main sponsor.

Real Zaragoza has dominated the BBVA Awards in the Liga Adelante, and this time it was the side's coach, Paco Herrera, who picked up the BBVA Award for the best coach of January, which the main sponsor of the Liga de Fútbol Profesional awards every month.

Herrera, who led the side from Aragon to three victories and a draw in January, is one of the most experienced coaches in the division, and his Zaragoza currently occupy fifth place, four points behind second position, which provides automatic promotion to the Liga BBVA.

The year could not have started any better for Herrera's men, who defeated Real Sporting de Gijón 2-3 on matchday 20 of the competition. Then it was AD Alcorcón's turn. The Madrid side visited the Estadio de La Romareda and was on the receiving end of a 3-1 defeat before Hércules CF proved to be the only team capable of taking a point from the side in January. Its final victim was CD Mirandés, who lost 0-1 at home.

In total, Herrera pocketed ten points from a possible twelve, a fact that has clearly helped his side stay in touch with those at the peak of the Liga Adelante.