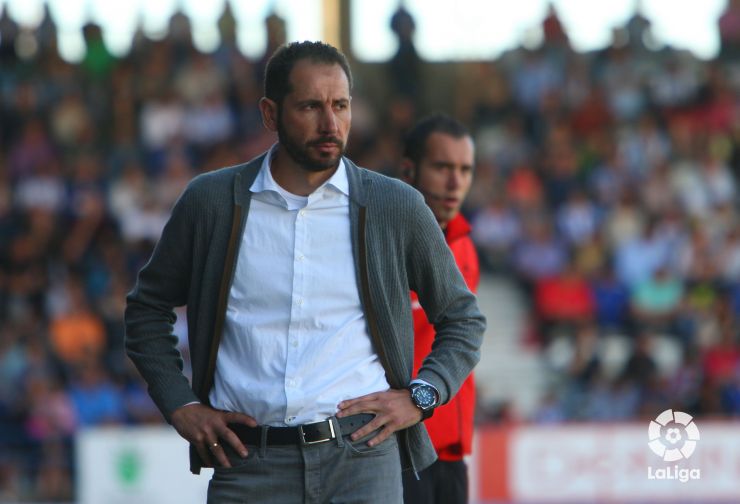 Pablo Machín: "It's great to be enthusiastic, but you have to be realistic"

LFP.es spoke to the manager who has led Girona to their best ever start to the league, where the team currently sharing leadership of the Liga Adelante.

After a difficult 2013/14 campaign, Girona FC have something to smile about once more. Their manager, Pablo Machín Díez (Soria, 1975), is one of the main architects of their success. Having saved the Catalan team last year, Machín has taken the team from Montilivi to the top of the Liga Adelante, level on points with UD Las Palmas, after the best start to a season in the club’s history: ten points from a possible twelve. He gave LFP.es an exclusive interview.

LFP.es: How is the team feeling about such a great start?

Machín: It was an ideal start. Getting three victories in a row in the Liga Adelante, where it is so close, is very difficult. Now we have to think of this start as a flash in the pan and not believe that we are going to be one of the teams at the top.

LFP.es: Is the goal this season still staying up?

Machín: We are well aware of what we are. The main goal is to stay in the division. From there, the results will set our goals for us. Right now we have to think that we have to get ten points fewer to achieve that goal. Seeing what happened last year, we know how difficult it is.

"Bad times are sure to come, and that is where we show that we are one big team"

LFP.es: What is the secret of the team’s success?

Machín: We have momentum from last year, from a method of training that worked for us. We were very clear on the type of player we wanted to sign. More than just looking at names, we've looked at men. We've looked at their performances, even though a lot of them come from the Segunda División B. Then, when the hard work turns into results, that is when the team gets confidence. We have to be cautious though and not get overconfident.

LFP.es: What are the differences and similarities between last year’s team and this one?

Machín: The coach and the working methods are the same, as well as the system that gave us such great results. Perhaps last year we had a team with more experienced players. We know that it is risky to bring in footballers with no experience of the Liga Adelante, but I like to work with that kind of player. They've shown me that they have really progressed and made big improvements and that I can trust them. With time it will turn out well.

LFP.es: After 23 matches in the relegation zone, Girona won 3-1 to achieve its goal. How did it feel after the final whistle, when you knew that the team was safe?

Machín: I felt the comforting feeling of having made a lot of people happy. When you see that a stadium is chanting your name… that had never happened to me. You celebrate as if it were a promotion and people say they want you to stay, regardless of what might have happened. They feel very proud that I had the courage to come and turn things around and allow them to identify with a team that gives its all on the pitch.

LFP.es: Have you got a message for the fans?

Machín: I'd like them to keep believing in the team. It is great to be enthusiastic, but you have to be realistic. Bad times are sure to come, and that is where we show that we are one big team. They shouldn't doubt us, as they will never feel let down by the team's effort in every match.