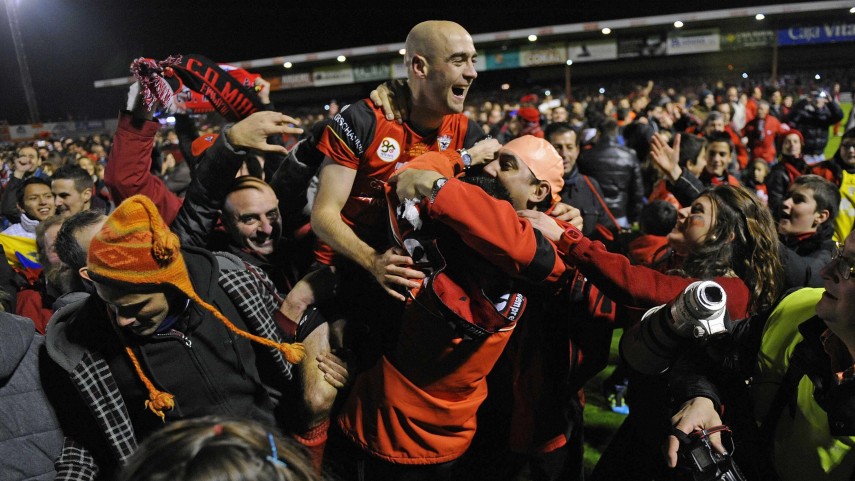 Pablo Infante, the heart and soul of Mirandés

The player from Burgos' goals have been key for the side from Miranda de Ebro and he is still a fan favourite in the Anduva.

Pablo Infante made a name for himself in Spanish football two seasons ago. The captain of that CD Mirandés side, managed by Carlos Pouso, which reached the semi-finals of the Copa del Rey against Athletic Club and won promotion to the Liga Adelante, Infante continues to be the master of the Municipal de Anduva stadium at 33 years of age.

A banker by profession and a footballer for the shear love of the game, the rojillos' number 14 shares his life between the offices and the pitch, where he has become a stalwart of the team that is now managed by Carlos Terrazas. After his participation in the side from Burgos was hampered by injuries last year, Liga Adelante fans have been able to enjoy his imagination, drive and skills once more this season.

Six goals in 19 matches for Mirandés this season, and he is getting close to his best ever campaign in the colours of the team from Burgos. However, this year those goals come with added value as they have provided seven of the 35 points collected by a team that hopes to stay in the Liga Adelante for another year.

The midfielder's last victim was RC Deportivo de La Coruña. His shot from the penalty spot sealed victory over one of the championship's best-placed teams, something that has provided a confidence boost to the Mirandés players. However, his knack for scoring decisive goals started in September against SD Ponferradina. Later came the turn of AD Alcorcón and Real Madrid Castilla to complete a quartet of teams who have suffered at his hands.

All eyes are now on Deportivo Alavés, a direct rival in the fight for salvation and one that represents an obstacle in Mirandés' road to safety at the end of the season.