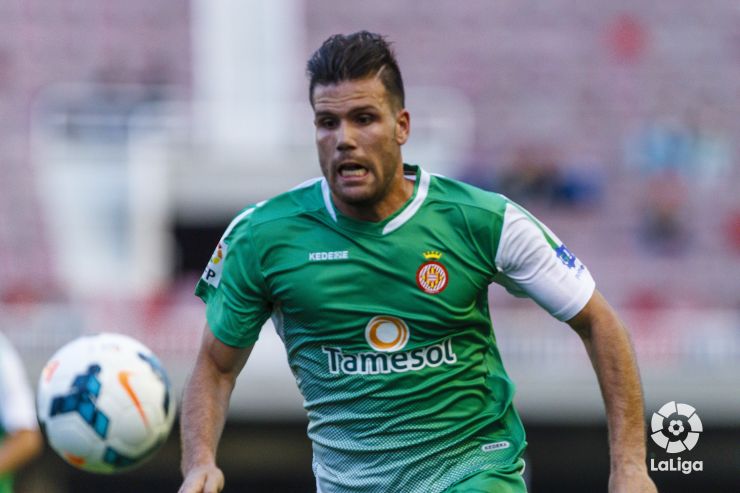 The forward from Murcia has scored eight goals in the second half of the season, including the double against Ponferradina to give his side the win and a fighting chance of staying up.

Girona FC are not having the best of seasons, but they’ve woken up in the campaign’s closing weeks, just when they needed to. Whilst in the relegation zone, the Catalan outfit were clinging on to the one hope they had left: Alfredo Ortuño.

The forward has been key in the second half of the season, scoring eight goals. The two most important goals came last weekend against SD Ponferradina, in a game where Girona needed to take the three points from El Toralín to keep up hopes of maintaining their place in the division.
It was a hard-fought victory right from the off, with Ortuño scoring an early goal. When Ponferradina equalised it was once again the man from Yecla who rescued his side with a strike ten minutes from the end to give his men the 1-2 victory. The win leaves Girona in 19th place, just one point from safety.

In the game against Real Madrid Castilla, a direct battle for safety, his quality also shone through. Whilst the crowd at the Estadio Municipal de Montilivi were cursing another loss, he popped up in the final minute to earn a point for his men. Once again with a header, which is starting to become something of a speciality for the young Girona forward.

A lot of the Catalan outfit’s hopes in the final game against RC Deportivo de La Coruña will rest on Ortuño’s shoulders. It won’t be easy, given that the Galician side have the second tightest defence in the league, only shipping 33.

Girona, in this aspect, are a balanced side. They have scored as many goals as they have conceded (49). There is nobody better than Alferdo Ortuño to readdress the balance in the final game of the season, in which Pablo Machín’s men will be looking to secure safety. He is a player who said upon his arrival in Catalonia that he’d give everything for the side: “I’m going to work my socks off and take advantage of this opportunity, I promise to work a lot”.