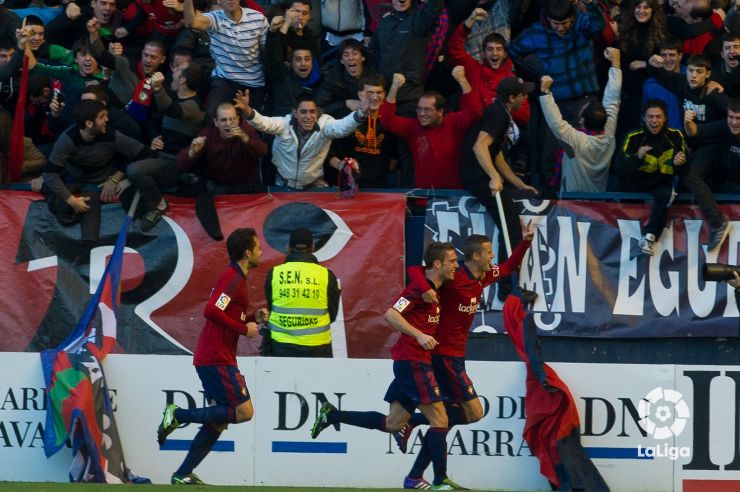 The Osasuna striker is enjoying a dream season in the Liga BBVA where his goals are keeping the Navarra fans happy week after week.

After coming through the youth ranks at FC Barcelona and then having spells at Cultural Leonesa, Celta Vigo, Córdoba CF and AD Alcorcón, this season Oriol Riera is competing in the Liga BBVA for the first time with Osasuna.

The Catalan’s 18 goals for the south Madrid club last season earned him a move to the BBVA outfit, where all the team’s hopes in attack have been placed on his shoulders. And so far Riera has found the weight of expectation easy to deal with, scoring seven goals in his 13 appearances with the Navarran side so far, a 53% likelihood of finding the net in each match.

Over the years Osasuna has had some big goal scorers in its ranks, such as Savo Milošević and Roberto Soldado. However, perhaps the name that stands out the most for the El Sadar faithful is that of Jan Urban.

The Polish player spent six seasons with the Pamplona club and during the 1990/91 campaign scored a hat-trick in the Santiago Bernabéu which helped towards a 4-0 victory for Osasuna. Riera did something similar at home on matchday 16 of the current Liga BBVA campaign, by scoring twice to give Osasuna a 2-2 draw against Carlo Ancelotti’s men.

But the comparisons between the two don’t end there. In his first season at the club Urban notched up eight goals, one more than Riera has managed to score so far this season. Should he continue his hot streak in front of goal, the Masía disciple could break some of Osasuna’s greatest ever goal-scoring records in a league season, like those held by Julián Vergara (20), Sabino Andonegui (15), Iván Rosado (14) and Jan Urban (13).

On top of that, of the players making their debuts in the Liga BBVA this season, Oriol Riera is the joint top goal scorer alongside Sevilla’s Carlos Bacca and Real Madrid’s Gareth Bale, all of whom have found the net seven times to date.