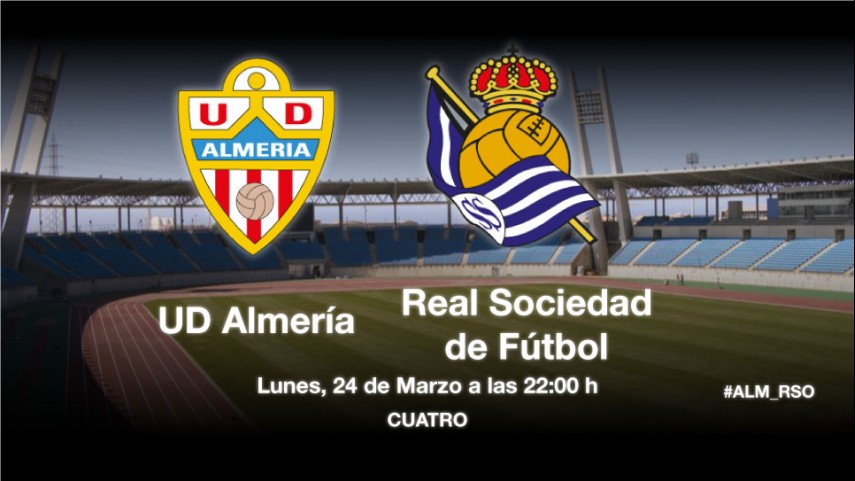 Opposing objectives in the Juegos Mediterráneos

Almería will be looking for its first victory in five matches against a Real Sociedad in search of fourth place and Champions League football.

UD Almería take on Real Sociedad de Fútbol on Monday at 22:00 in one of the highlights of Liga BBVA matchday 29.

The home team will be looking for another victory in the Estadio de los Juegos Mediterráneos to go with the 2-0 win they produced against Club Atlético de Madrid on the 8th of February. To do so, its coach, Francisco Rodríguez, will be without defender Sebastián Dubarbier and midfielder Hans Martínez, who are both injured, and suspended striker Rodri.

In addition, Marco Torsiglieri and Ramon Azeez are doubtful. Francisco spoke of the importance of the match: "We know what is at stake, we are well aware and we are going to apply maximum pressure".

The Basque side, for its part, are looking to move towards fourth place, which provides access to the UEFA Champions League and is currently occupied by Athletic Club, who are seven points ahead. Midfielder Esteban Granero will be joined by full-back Joseba Zaldua on the sidelines. Jagoba Arrasate, the txuri-urdin coach, talked about what he will be expecting from his understudies: "In Almería we have to be just as competitive as against Valencia".