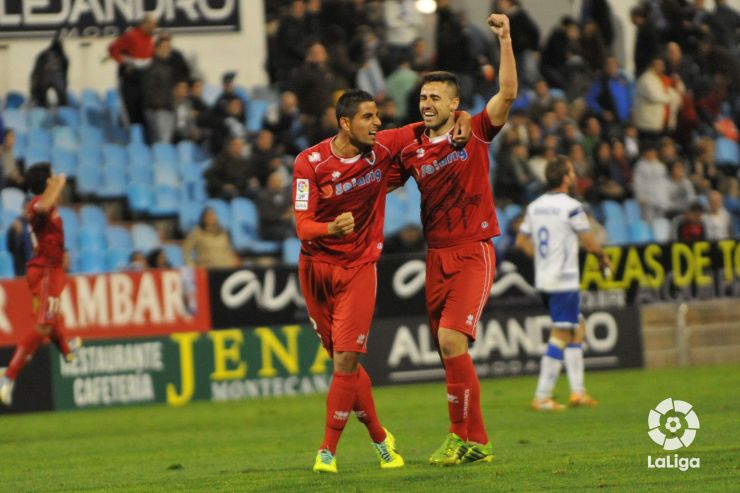 Having gone six games without losing, the side from Soria now find themselves in the Liga Adelante promotion play-off spots.

CD Numancia are experiencing their best moment of the season. Having gone six matches unbeaten, Juan Antonio Anquela’s side now find themselves up near the top of Liga Adelante. Little by little the side from Soria are showing that they are one of the league’s best sides.

With wins against FC Barcelona B and Real Zaragoza, Numancia recorded two wins in a row for the first time this season. Against the Catalan side they struggled, however a goal from Antonio Tomás was enough to secure three points and place in the play-offs. In the last round of fixtures, at La Romareda against Real Zaragoza, the visitors secured a 1-2 win courtesy of strikes from Julio Álvarez and Mickaël Gaffoor towards the end of the match.

With 12 points from the last 18 available, Numancia have completely changed direction since losing to Real Murcia CF on the 29th of September. Since then, Anquela’s men haven’t lost a game. Three wins - versus AD Alcorcón, FC Barcelona B and Real Zaragoza - and three draws -against Real Sporting de Gijón, Hércules CF and CD Mirandés - is how their last six games have panned out.

The side’s defensive security can be shown in the fact they have only conceded two goals in these six games, helping the side become one of the top eight of the division’s tightest defences.

One of the keys during the good run is the side’s form at Estadio de Los Pajaritos, where they’ve yet to lose. Away from home, the figures are equally impressive. They will next face CF Tenerife at home, followed by Real Madrid Castilla at the Alfredo Di Stéfano, two winnable fixtures which give the side the chance to carry on their good run.