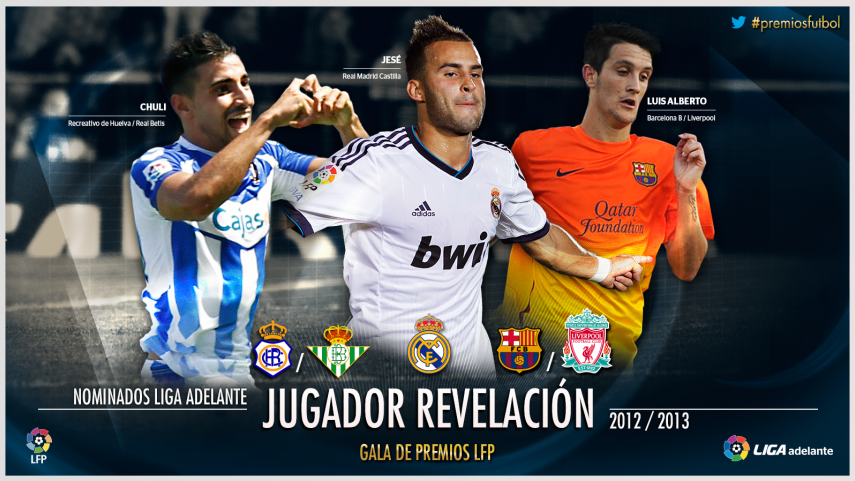 Nominees for the Breakthrough Player award in Liga Adelante

'Chuli', Jesé Rodríguez and Luis Alberto will find out on Monday the 2nd of December who the winner is.

Three fantastic footballers who formed key parts of their sides in the last campaign will fight it out to be named Breakthrough Player in Liga Adelante, with the prize being handed out at the LFP Awards Gala on Monday the 2nd of December.

Manuel Jesús Vázquez 'Chuli', was crucial for RC Recreativo de Huelva, playing 38 games. The man from Andalusia scored 15 times in the 2012/13 season, leading his side's scoring charts. His pace and instinct in front of goal persuaded Liga BBVA outfit Real Betis Balompié to sign him in the summer.

Jesé Rodríguez helped Real Madrid Castilla with both his overall play and goals in a very convincing year. The Canary Islander scored 22 goals, finishing second in the league's goal scoring charts. His versatility and maturity have seen him promoted to the first team at Real Madrid this season, where he has made his debut, and opened his account in Liga BBVA.

Luis Alberto was a crucial cog in Eusebio Sacristán's FC Barcelona B side. A direct player with excellent technique, he possesses the pace to play on the wing or as a second striker. He regularly took to the field in both positions, making the change look easy, always causing opponents cause for concern. His performances at the Catalan side last season caught the eye of Liverpool FC, who signed him in the close season.