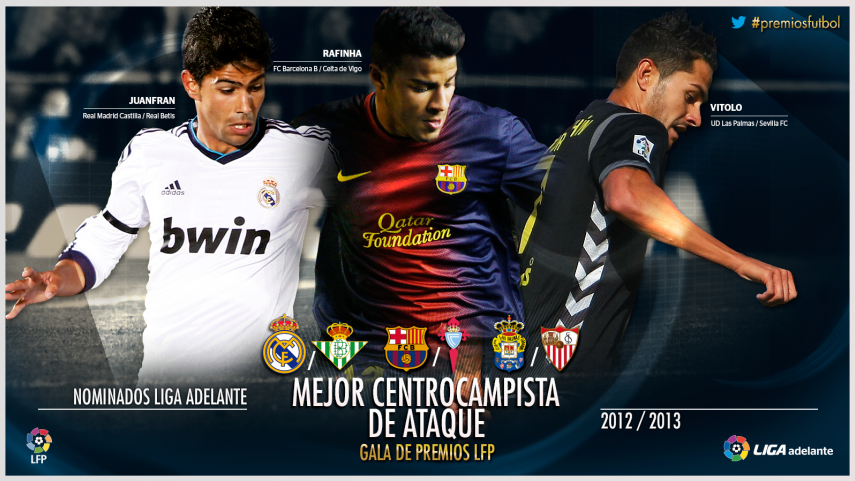 Juanfran, Rafinha and Vitolo are the three players shortlisted for the prize at the LFP Awards Gala on the 2nd of December.

Their impressive statistics from last season earned them the respect of their teammates and a place in the Liga BBVA. The three Liga Adelante attacking midfielders (Juanfran Moreno, Rafinha and Víctor Machín 'Vitolo') will be vying for the prize, which is to be presented on Monday the 2nd of December at the LFP Awards Gala.

Juanfran was a revelation for Real Madrid Castilla last season. His versatility made him a shoo-in for the Madrid side, finishing the season with 42 matches and four goals under his belt. This outstanding performance led to his signing with Real Betis Balompié, where he is a regular under Pepe Mel.

Rafinha was a key player for FC Barcelona B in the 2012/13 campaign. His imposing presence in the middle of the pitch and the goals he contributed to the azulgrana reserves (ten in thirty-six matches) helped his team finish ninth in the Liga Adelante. Luis Enrique, who was already familiar with the player from his time at Barcelona, had his eye on him and has made him one of the stars of his team at RC Celta de Vigo, where he is showing off his skills this season.

Víctor Machín 'Vitolo' dazzled at UD Las Palmas last season. He found the net 15 times in 39 Liga Adelante matches, making him one of the Canary Island team's most important players and catching the eye of Sevilla FC, where he has won the trust of Unai Emery in the centre of the pitch.