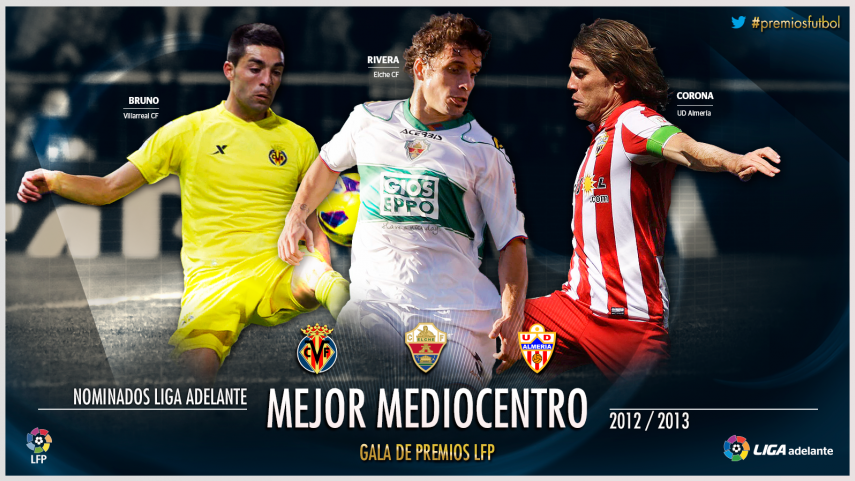 Nominees for the Best Central Midfielder in Liga Adelante

Bruno Soriano, Corona and Alberto Rivera are the three who will fight it out for the prize at the LFP Awards on the 2nd of December.

Three players who last season earned promotion to Liga BBVA will fight it out to be chosen as Liga Adelante's best central midfielder at the Gala when the LFP Awards are handed out on Monday the 2nd of December.

Bruno Soriano was a key factor behind his side's promotion as one of Villarreal CF's star performers last season. The man from Artana (Castellón) played 36 times in Liga Adelante, equating to more than 3,000 minutes on the pitch, scoring a total of four goals. Now, once again in Liga BBVA, Bruno remains a key piece of the Yellow’s jigsaw.

Miguel Ángel García 'Corona' was another of Liga Adelante's stars last season in the shirt of UD Almería. The Andalusian outfit, who earned their place in Liga BBVA thanks to a playoff victory over Girona FC, had a real brain in the centre of the park, where their man played 37 times, scoring four goals.

Veteran Alberto Rivera is the third player nominated. The 35 year old was one of the shining lights in the championship winning season enjoyed by Elche CF. Rivera carried the side on his back, playing 38 games for Fran Escribá's side, pulling the strings in the middle of the park.