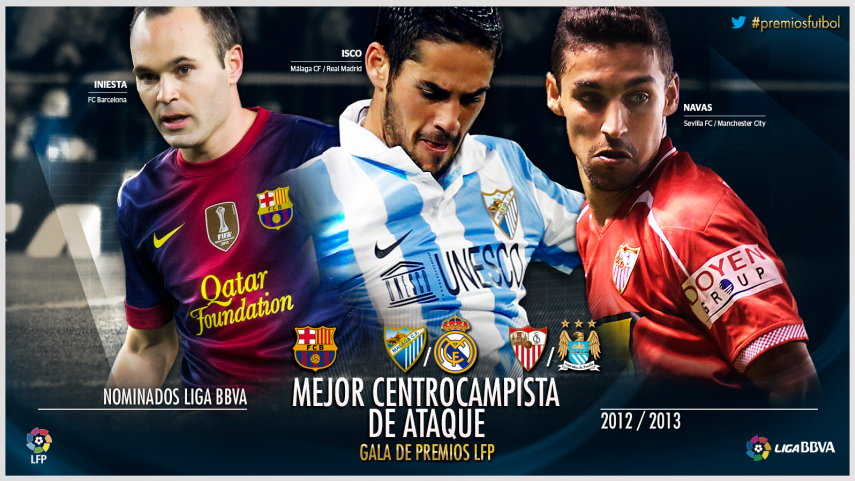 Nominees for the best attacking midfielder in Liga BBVA

Andrés Iniesta, Isco and Jesús Navas are the three shortlisted for the prize at the LFP Awards Gala.

Three players full of magic when the ball is at their feet are shortlisted for the prize of best attacking midfielder in Liga BBVA at the LFP Awards. The Gala is to be celebrated on Monday the 2nd of December.

A genius for FC Barcelona over the last few years, Andrés Iniesta is one of the reference points in Spanish football. A fundamental part of Tito Vilanova’s title winning team, Iniesta played 31 times in Liga BBVA.

Isco Alarcón wowed fans both at home and abroad last season with Málaga CF. After Santi Cazorla’s departure, Isco helped lift the Andalusian side up the table and kept them there until the end of the season. His technical quality and movement on the pitch earned him a move to Real Madrid CF. Also, Isco showed his improvement last season by scoring nine goals, a career high over a season.

The electric Jesús Navas, one of the finest ever graduates from Sevilla’s academy, played 37 times for his boyhood club, motoring up and down the right wing. Always a starter, Navas was the perfect foil for Álvaro Negredo, with whom he formed an offensive tandem of the highest quality, of which there are very few in Liga BBVA.