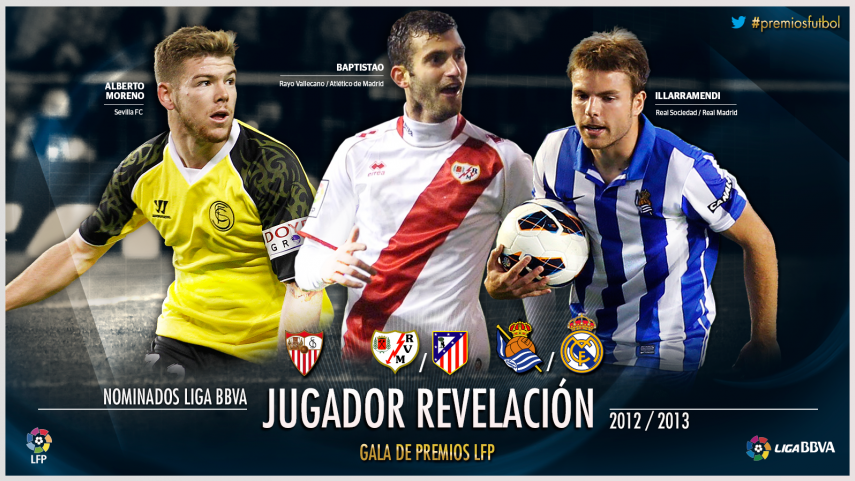 Alberto Moreno, Léo Baptistão and Asier Illarramendi are the three finalists for the award, which is to be presented at the LFP Gala on Monday the 2nd of December.

Three outstanding players who capitalised on their youth to put in some great performances for their respective teams last season will be bidding to take the Liga BBVA Breakthrough Player Award on Monday the 2nd of December.

Alberto Moreno burst onto the scene at Sevilla FC, winning his place in the team last season and playing 15 matches in the Liga BBVA. His progress and talent have led to a call from Vicente del Bosque to make his debut in the Spanish senior squad. This season his coach, Unai Emery, has had enough confidence in him to give him a regular place in the starting line-up and Alberto Moreno has made sure it has been worth his while.

Léo Baptistão became Rayo Vallecano's star last year thanks to his goals, above all early in the Madrid side's early season. He found the net seven times for Paco Jémez's team, helping them to stay in the Liga BBVA for another year. His eye for goal did not go unnoticed in the Spanish capital and Club Atlético de Madrid snapped him up for this season.

Asier Illarramendi was a key factor in Real Sociedad de Fútbol's brilliant campaign last year, in which they qualified for the UEFA Champions League. An essential midfielder for the txuri-urdin, Illarramendi played 32 matches for Philippe Montanier's side. His performances turned heads at Real Madrid CF, who signed him in the summer to strengthen its midfield.