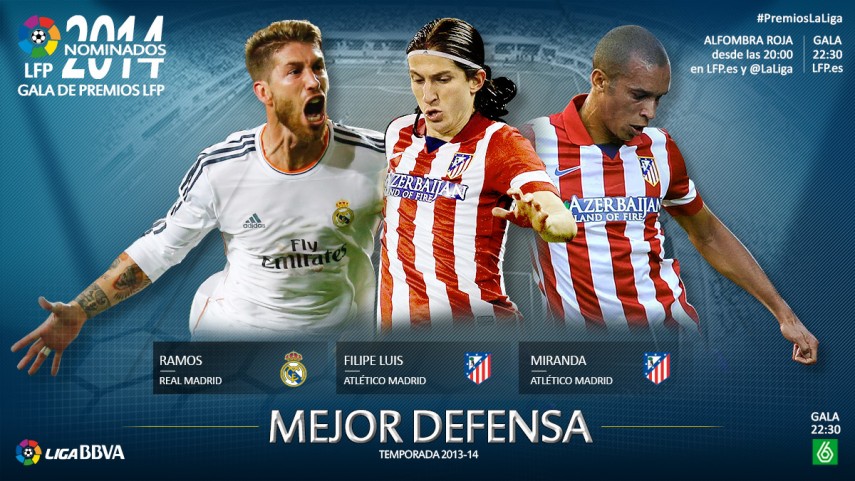 Sergio Ramos, Filipe Luis and João Miranda are the contenders for the coveted award in the 'LFP 2014 Prize Gala'.

They tirelessly helped their teams quell opposition attacks and now Sergio Ramos, Felipe Luis and João Miranda are up for the award for 'Best Defender in the 2013/14 Liga BBVA'. The latter two, part of the meanest defence in the championship, and the Whites’ centre back, who was the cornerstone of one of the most solid back lines last season, have earned themselves the status of the three most outstanding defenders in the 'LFP 2014 Prize Gala', to be aired on La Sexta (10.30 pm).

He wore the captain’s armband for Real Madrid in the Liga BBVA and was a key man in the team’s success in the UEFA Champions League and Copa del Rey. With a total of 32 matches played, 4 goals and an assist, Sergio Ramos is an all-time great in the Madrid rearguard. He won the prize last year for an outstanding 2012/13 season and this time he has been convincing again with his impressive aerial game and his “striker’s spirit”, as he has confessed to possessing.

Filipe Luis used all his ability, physical strength and speed to become a permanent fixture in Diego Simeone’s starting eleven in the 2013/14 season. The Liga BBVA champion played for a total of 2,880 minutes in the top flight of Spanish football, proving to be a force in the Rojiblanco back line. The left back now plays for Chelsea FC.

His former team-mate, João Miranda, completes the list of nominees for ‘Best Defender in the Liga BBVA’. He was part of the meanest defence in the competition, an impenetrable wall that was pivotal in the side’s Liga BBVA title and, later, the Supercopa de España. In addition to being a force in the Atlético defence, Miranda scored four goals last season.