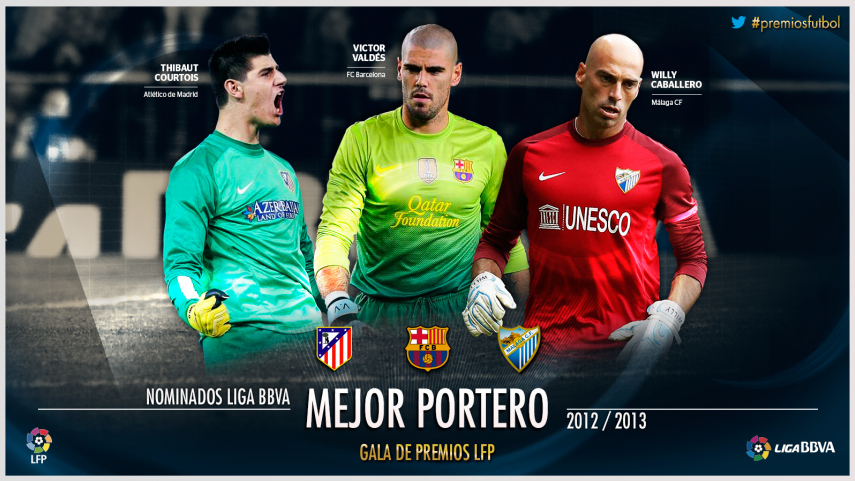 Thibaut Courtois, Víctor Valdés and Willy Caballero are up for the gong for the best keeper in the Spanish top flight to be presented on Monday the 2nd of December.

hree top-class shot-stoppers have been nominated for the Best Liga BBVA Goalkeeper award, whose winner will be announced at the LFP Gala which is due to take place on Monday the 2nd of December.

Despite his youth, Thibaut Courtois has already made a name for himself in Spanish football. The performances of the 21-year-old Belgian player in the ranks of Club Atlético de Madrid allowed the rojiblancos to record a magnificent season, winning the Copa del Rey and finishing in an impressive third place in the Liga BBVA, where he was the goalkeeper to concede the fewest goals in the competition.

Víctor Valdés is one of the world's greatest keepers. His spectacular form during the year saved Barcelona at numerous key moments on their way to the 2012/13 league title, equalling the record number of points in the championship (100). He was the goalkeeper to concede the second fewest number of goals in the campaign.

Finally, veteran Willy Caballero was one of the architects of Málaga CF's great season last year. The Argentinian shot-stopper surprised everyone with his performances throughout the season, allowing the Andalusian side to reach a remarkable sixth place in the table and make club history by reaching the quarter finals of the Champions League.