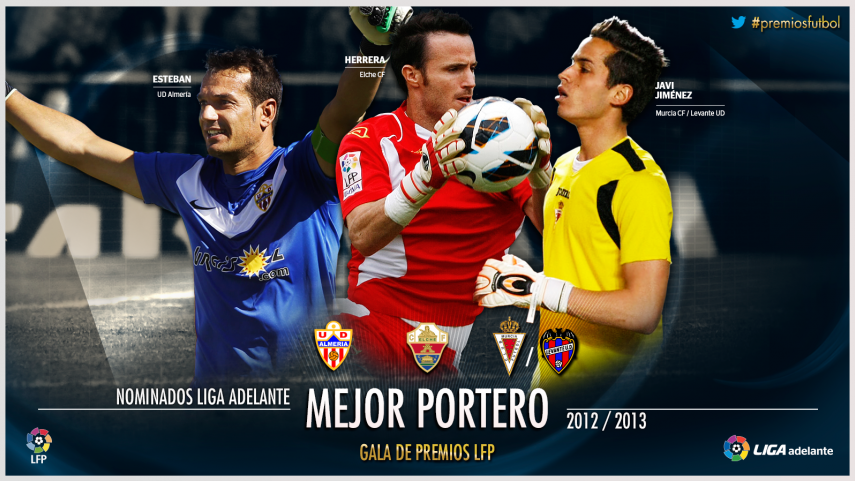 Esteban, Javi Jiménez and Manu Herrera are the three players who are to go head to head for the prize that is to be presented at the LFP Gala on Monday the 2nd of December.

Three keepers, who were all stars of their respective teams last season, will be fighting it out for the Best Liga Adelante Goalkeeper award, which is to be presented on Monday the 2nd of December.

Esteban is a household name in Spanish football. The Liga BBVA's current oldest player continues to put in great performances, as he demonstrated last year, leading UD Almería to a treasured promotion. During the campaign, the 38-year-old Esteban played in 42 Liga Adelante matches and all four promotion playoff ties.

Manu Herrera was a stalwart in Elche CF's brilliant promotion winning-campaign. The shot-stopper from Madrid was the keeper to concede fewest goals in the Liga Adelante last season, with just 25 finding their way past him in 39 matches, allowing the team to return to the Liga BBVA after 24 years. This season Herrera is still showing off his skills between the sticks for an Elche that continues to surprise.

Javi Jiménez was undoubtedly one of Real Murcia CF's outstanding players last season. The Rioja native's excellent performances did not go unnoticed in Spanish football, whose gaze was fixed firmly on the 26-year-old keeper that made the leap to the Liga BBVA this summer by signing for Levante UD.