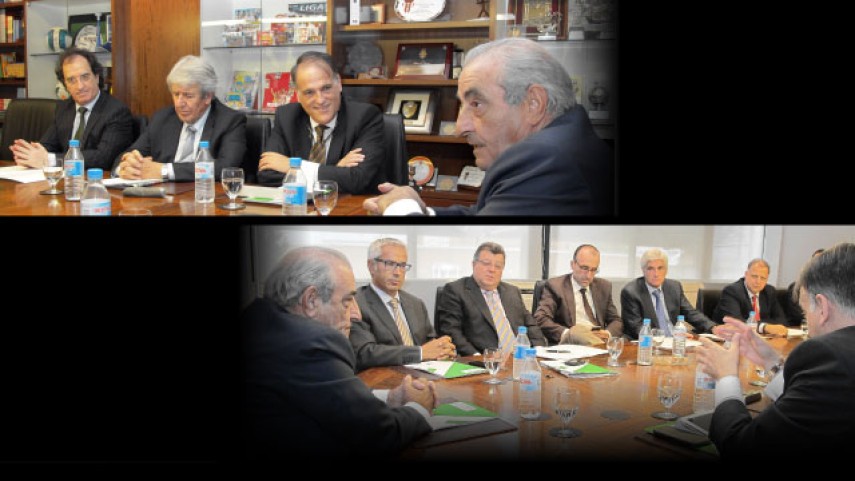 Miguel Cardenal will be Honorary President and Juan José Hidalgo will fill the position of President of the FFP.

In the Ordinary General Meeting held on Wednesday at the headquarters of the LFP, the new composition of the highest governing authority of the Fundación del Fútbol Professional (FFP) was decided. Also in the meeting, the Action plan for the year 2013/14 and the income and expenses budget for the financial year from the 1st of July 2013 to the 30th of June 2014 were approved.

The President of the Higher Board of Sports, Miguel Cardenal, was named Honorary President of theBoard of Trustees of the Fundación del Fútbol Profesional, and Juan José Hidalgo, its President. For their part, Clemente Villaverde and Víctor Manuel Martín, representatives of Atlético de Madrid and Numancia, respectively, will continue their roles as Vice Presidents and Carlos del Campo, the LFP's Legal Director, was named Secretary of the Board.

The other seats are occupied by Javier Tebas and Javier Gómez as President and General Director of the LFP; Manuel Vega Arango, Pedro Tomás Marqués and José Luis Astiazarán as ex-Presidents of the LFP; Ángel María Villar, as the representative of the Real Federación Española de Fútbol; and Julián Redondo, on behalf of theSpanish Sports Press Association.