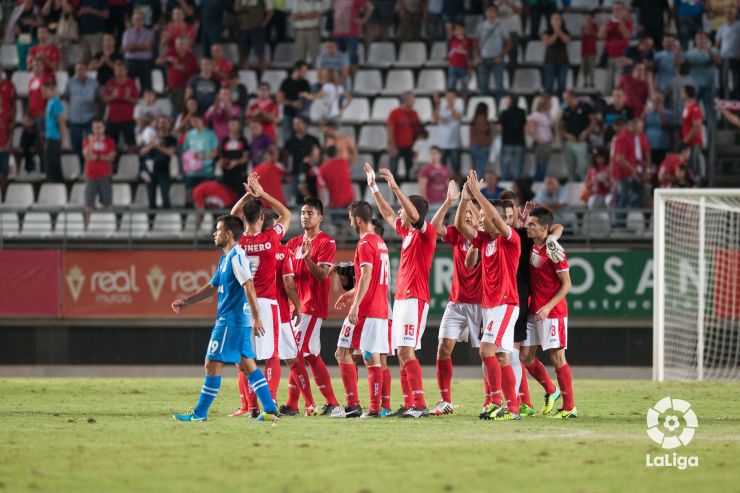 After their latest two victories, the granas find themselves in sixth place in the Liga Adelante with 43 points and right in the thick of the fight for the playoffs.

"I will never tire of talking about the amazing work put in by this team", said manager Julio Velázquez of Real Murcia CF's performances in the closing stretch of the Liga Adelante. The goal of staying up set by the team at the start of the season has already been achieved and now he has set his sights higher: fighting for a place in the Liga BBVA.

The team's latest two victories over Girona FC (0-1) and Real Jaén (2-0) have taken them to 43 points and a playoff position. The goal from Dominique Malonga and a great performance from Casto Espinosa between the sticks, gave the team victory over the Catalonian outfit on Sunday. The Andalusian keeper stopped a penalty and kept out an equaliser in the dying minutes of the game, making him the star of the match.

But a closer look at the season so far brings to mind the names of other key men who have been crucial to the side's rise to the top end of the table. Despite lacking experience, the Liga Adelante's youngest coach, Julio Velázquez, has managed to build a strong team that strikes fear into the hearts of its opponents. His professionalism and desire to win have led the side from Murcia to greater things than their initial goal of salvation.

Kike García is another of Murcia's heroes. With fifteen goals so far this season, he has become the team's most prolific striker. The man from Cuenca has surpassed his best goal-scoring season with goals that have given his team points that have proven essential for them to enjoy their current position.

With 10 victories, 13 draws and 7 defeats, Murcia CF are 12 matches away from fulfilling a dream, but the granas will have to take on some of their closest rivals, such as UD Las Palmas, Real Sporting de Gijón and CD Tenerife, among others. The closing stretch of the Liga Adelante promises to be a thriller.