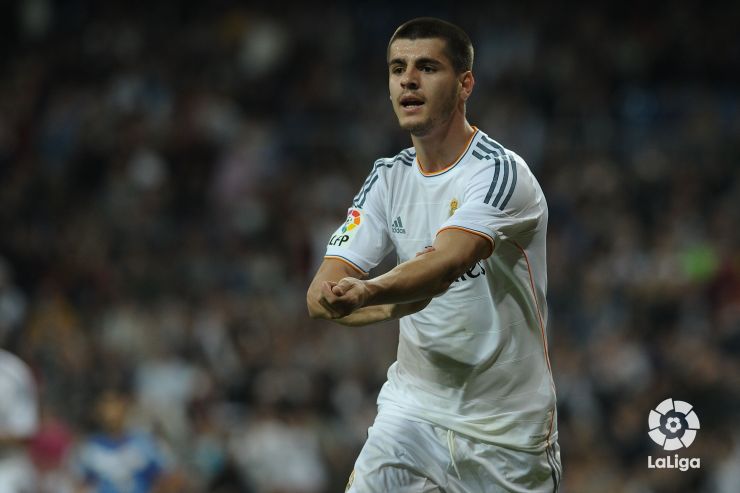 Morata has goals in his blood

The Real Madrid forward has scored in the last three rounds of games and has an outstanding record: a goal every 46 minutes.

Pure gold. That is Álvaro Morata, a 21 year old forward who lives and enjoys every day the dream of wearing the Real Madrid CF shirt.

His youthfulness has not impeded him from tasting the fruits of success in the footballing world. A Liga BBVA, a Copa del Rey, a Spanish Supercup, a Euro U-19 and a Euro U-21 – these last two as top scorer – sit in his trophy cabinet from his short but intense career thus far. Now, in his second season as a full member of The Whites’ first team, the academy graduate is taking advantage in the best way possible of all his opportunities.

Morata has scored six goals this season despite having only played 276 minutes, meaning he averages a goal every 46 minutes. This impressive strike rate makes him the squad’s most efficient goalscorer and one of European footballs most lethal strikers, something which cannot be ignored.

Real Madrid’s ‘21’ has also found the net in his last three games despite starting on the bench. Rayo Vallecano were the side whom the Madrid-born star started his run against, finding the net with a powerful and precise effort to round off a 5-0 win. His form in front of goal continued a week later at the Estadio de Anoeta, scoring the final goal in a 0-4 against Real Sociedad de Fútbol with a piece of play the best forwards would be proud of: he raced in behind the defence, slotting past the ‘keeper without hesitation.

His last goal came on Saturday against UD Almería, as he once again put the gloss on a goalfest. Asier Illarramendi, who was one of his teammates in the Euro U-21 winning side, connected with Morata via a chip over the top of the defence, and the forward made no mistake. With a subtle loft over the goalkeeper, he made it 4-0 and scored his sixth Liga BBVA goal of the season. As the forward showed in his celebration, hitting himself vehemently in the forearm, he has goals in his blood.