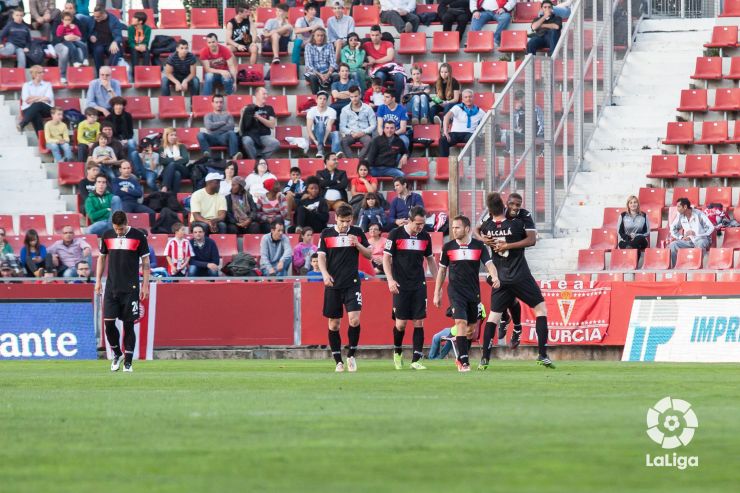 Matchday full of upsets in the Liga Adelante

The teams at the top of the table were surprised by their opponents on a weekend when Las Palmas and Murcia were the big winners.

The 30th matchday of the Liga Adelante was full of upsets, with teams like Real Jaén CF, Hércules CF, FC Barcelona B and Real Madrid Castilla standing up to the teams at the top of the table.

SD Eibar will remain the solitary leaders for another week despite being unable to do better than a draw (1-1) against Hércules, whose manager Quique Hernández was celebrating his 200th game for the Alicante club. Eibar still have a one-point lead over their nearest opponents, RC Deportivo de La Coruña, who also drew (0-0) against a Barcelona B that continue their good form.

Two serious candidates for promotion, RC Recreativo de Huelva and Real Sporting de Gijón, were also unable to climb the table, losing against Castilla (2-3) and Jaén (3-2) in two relentless matches. The Whites’ reserves, led by Willian José who scored a hat-trick, stay above the relegation zone. Jaén had the same fate, remaining mid-table through two goals from Jona Mejía.

UD Las Palmas, who thrashed CE Sabadell FC 5-0, and Real Murcia CF, who overcame Girona FC 0-1, were the big winners of the day. The Canary Islands team and Murcia, in fifth and sixth place, are in play-off spots for promotion. SD Ponferradina and AD Alcorcón ended the day in the relegation zone despite earning victories against Real Zaragoza (4-2) and CD Numancia (0-1). Deportivo Alavés, who lost 0-2 against CD Mirandés, are bottom of the table along with Girona, whose manager Pablo Machín was unable to celebrate his debut with a victory.

In other matches of the day, Córdoba CF and CD Lugo drew 1-1 and RCD Mallorca defeated CD Tenerife 2-0 to end a poor run of seven league games without a win.