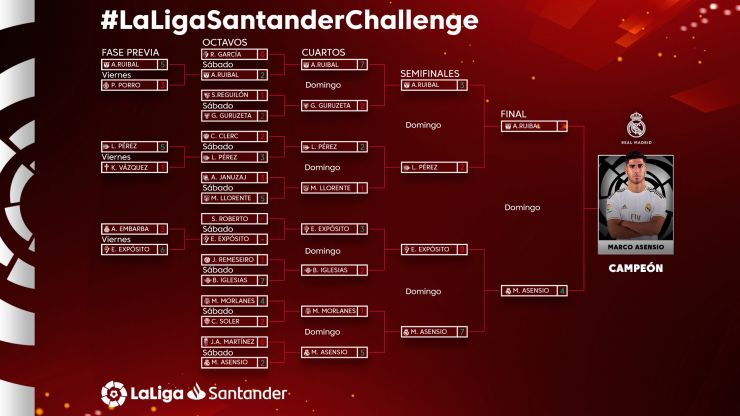 Los Blancos won the FIFA20 tournament, organised by gamer Ibai Llanos to raise money for the fight against the COVID-19 virus.

Real Madrid, managed by Marco Asensio won the inaugaural #LaLigaSantanderChallenge on Sunday evening, beating CD Leganes 4-2 in the final. The tournament was organised by Spanish gamer Ibai Llanos and involved 18 clubs from LaLiga Santander, who in total raised over €140,000 in the fight against the COVID-19 virus.

Asensio was solid throughout the tournament, played on FIFA20 by EA Sports, overcoming Granada CF, Villarreal CF and SD Eibar on his way to the final. There he met CD Leganes and Aitor Ruibal, scoring twice with himself as los Blancos romped to a 4-2 triumph.

Hundreds of thousands of people tuned in via Ibai's Twitch profile, with the tournament also broadcasted live on Spanish TV and in 10 countries across the world. Follow LaLigaEN and eSportsLaLiga on Twitter and relive the best videos and updates from the #LaLigaSantanderChallenge.