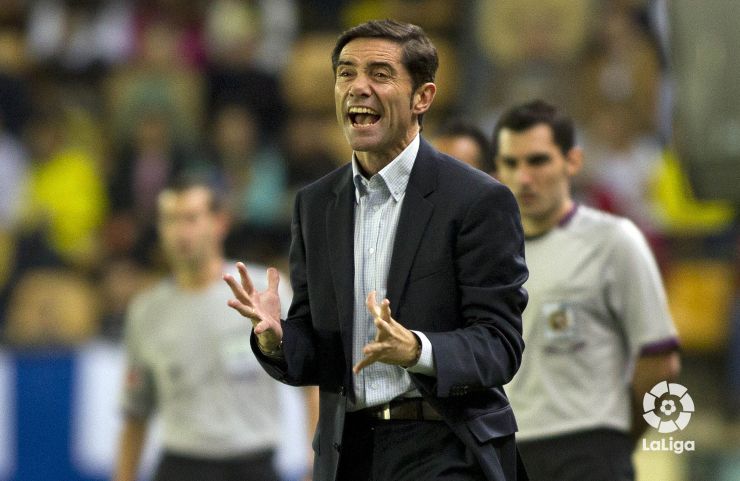 In his 365 days at the helm of Villarreal, Marcelino has managed to take the team to the Liga BBVA and then to the top end of the table.

One year ago, the first images of Marcelino García Toral in charge of Villarreal CF came from his debut at the Alfredo Di Stéfano stadium, where he was on the receiving end of a pummelling from Real Madrid Castilla (5-0). But this poor start was followed by an incredible end to the season.

The progress of the Yellow Submarine in twelve months has been spectacular. He joined the team after four games without a win, two of them resulting in defeats and the others in a point each. In seventh place in the Liga Adelante, 17 separated them from Elche CF, the division's leaders at the time. It was a huge gap that Marcelino had to overcome to achieve his main goal: returning to the Liga BBVA as soon as possible.

Their 5-0 defeat to Castilla was a serious stumbling block on the road to glory. But Marcelino and his men managed to recover from that hammer blow. The low only lasted a week, until his first match in El Madrigal, when the team beat CE Sabadell FC 3-0 and set the foundations for the system used by the Villarreal today.

This form continued until the end of the season, when they won automatic promotion to the Liga BBVA by finishing in second place with 21 victories, 13 more than when he took the reins. Marcelino brought a smile back to the faces of the fanswho had placed so many expectations on his shoulders.

The icing on the cake to his 365 days came last weekend with the 2-0 victory over UD Almería. The three points (they now have 37) and their current fourth place in the Liga BBVA are the best gift he could possibly give a team that plays a brand of passing football that has the fans head-over-heels.

The UEFA Champions League spot is a sensational way to end a year in which Marcelino has hoisted Villarreal up from the Liga Adelante and turned them into one of the best teams in Spanish football.