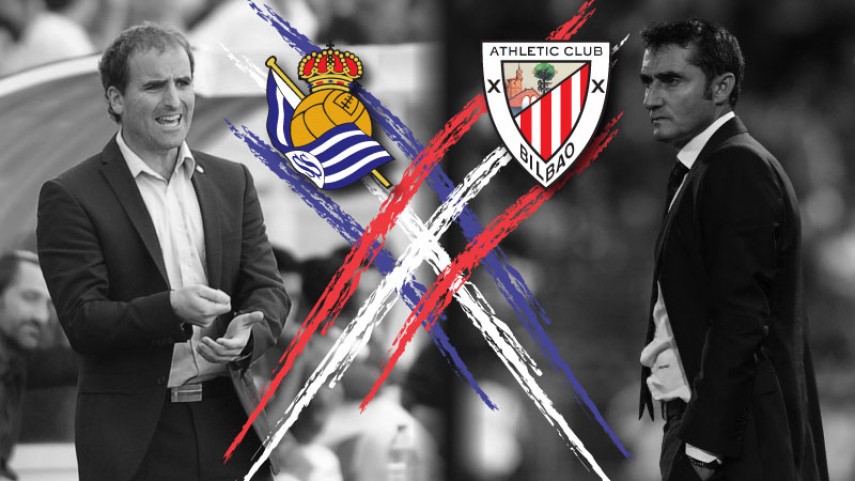 Managers have derbies too

Arrasate and Valverde, two coaches who learnt their trade in Basque football, are back for another Real Sociedad - Athletic after six seasons.

The Basque derby between Real Sociedad de Fútbol and Athletic Club on matchday 18 of the Liga BBVA will represent, as it always does, one of the high points of the Spanish football calendar. But this season the encounter will be injected with an extra dose of passion, as it will be the first time in six seasons that the two managers, who learnt the game in the Basque country, are at the helm of the guipuzcoanos and bilbaínos.

Although Jagoba Arrasate only began his time in charge of the txuri-urdin this season, he already has experience of a Basque derby from inside the ropes. Last season he accompanied Philippe Montanier on Real's bench and he knows what it means to play against Athletic. This season, at just 36 years of age, the coach will be directing his team in the Anoeta in this special match. In his first season as manager of Real Sociedad, the man from Biscay already has his men fighting for a UEFA Champions League spot, with 29 points the side is four points behind its fierce rival.

On the opposite bench will sit an Ernesto Valverde who, despite having been born in Cáceres, grew up in Vitoria and spent a large part of his career as an Athletic player, he has strong ties with the region. Also, his first spell as a manager came with the rojiblancos, and in his first season in the San Mamés he beat Real Sociedad 1-0 on matchday four of the 2003/04 campaign. Txingurri's record against Real as coach of the Bilbao team is two victories, one draw and one defeat in the Liga BBVA.

To find a similar situation in this derby we have to go back six years. Specifically until the 2006/07 campaign, when the rojiblancos, under the orders of José Manuel Esnal 'Mané', beat Miguel Ángel Lotina's txuri-urdin 0-2 . They did so by means of a brace from a young defender named Andoni Iraola who will be wearing his team's shirt just as he did six years ago.

Interestingly, in the first half of the same season both clubs were also led by Basques. José Mari Barkero, for Real, and Félix Sarriugarte, for Athletic, coached the teams in a memorable derby. On Sunday it will be the turn of Arrasate and Valverde to add to this rich history.