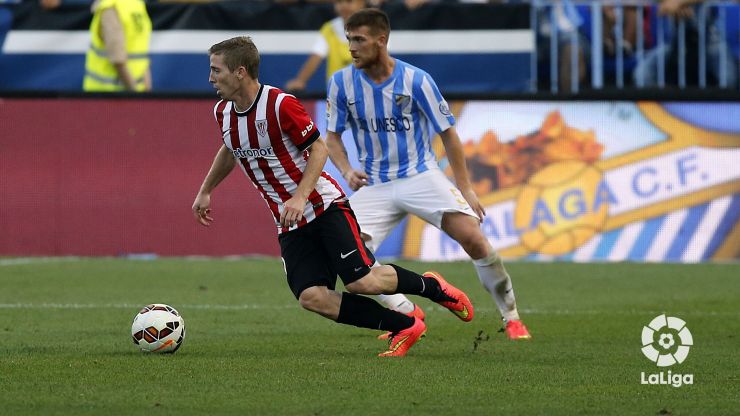 A goal from Luis Alberto in the first half earned a victory for Javi Gracia's side against an Athletic that never gave up.

Málaga CF defeated Athletic Club 1-0 on matchday 1 of the Liga BBVA. Luis Alberto's first-half goal gave the home side three valuable points at La Rosaleda.The Rojiblancos dominated the game from the start and their best chance came within a quarter of an hour.

After a spectacular pass from Iker Muniain, striker Aritz Aduriz avoided two Málaga defenders and managed to shoot, but his strike found goalkeeper Idriss Kameni, who deflected the ball. Javi Gracia's side responded and after a counter-attack involving Ricardo Horta and Juanmi, the shot from the Malaga striker brushed past the post.

The home side started to look more comfortable on the field, threatening Gorka Iraizoz’s goal. It was the Basque goalkeeper who took down Roque Santa Cruz inside the box and the referee awarded the penalty in the 35th minute. Iraizoz stopped Luis Alberto's strike, but he recovered the rebound and this time sent it to the back of the net, making it 1-0.

Ernesto Valverde went out in search of the equaliser in the second half and Mikel Rico came close to scoring with a perfect header from a free kick taken by Ibai Gómez, but the finish went just wide. With Athletic at their most threatening, Samuel surprised the Rojiblancos with a powerful strike that could have decided the match, but the scoreboard remained on 1-0 until the final whistle.