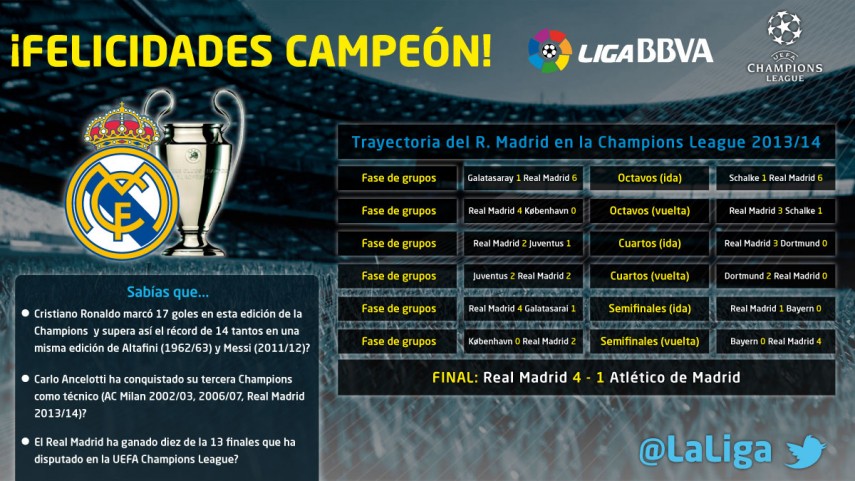 The Whites underlined their status as the most decorated team in Europe by winning their Champions League final against Atlético de Madrid.

Real Madrid have won the UEFA Champions League once more after beating Club Atlético de Madrid 4-1 in the final in Lisbon.

It had been 12 years since Real Madrid last tasted European glory. It was the 15th of May 2002 when a volley from Zinedine Zidane, now the Whites’ assistant coach, brought a ninth European Cup to the team that was then coached by Vicente del Bosque.

Since then the team from the capital has had its fair share of difficulty in Europe. Eight consecutive years without getting through the last sixteen were followed by three seasons on the trot reaching the semis under the tutelage of José Mourinho. After the Portuguese’s exit last summer, Carlo Ancelotti arrived at the Santiago Bernabéu tasked with reconquering Europe, this time at the helm of Real Madrid.

The 2013/14 edition could not have started better for Iker Casillas, Sergio Ramos, Cristiano Ronaldo and company. An almost perfect start to their group left the Whites at its peak ahead of teams such as Juventus. Then came the first of three visits to Germany to take on FC Schalke 04 in the knockout stages. The Germans were unable to handle a Real Madrid side that booked its place in the quarters by putting nine goals past the team from Gelsenkirchen.

Borussia Dortmund were the club from Chamartín’s next victims. Jürgen Klopp’s men had ended Real Madrid’s dream in the semi-finals of the previous edition, but this time a 3-0 win in the Santiago Bernabéu was enough for the Whites, who lost 2-0 in Germany, to make their way to their fourth consecutive Champions League semi-final, where they would meet the defending champions: FC Bayern München.

The Bavarians, under the orders of Josep Guardiola, were dominated by a team that won 1-0 in Spain and went on to produce a 4-0 victory in the second leg to reach the grand finale in Lisbon against Club Atlético de Madrid, the recently crowned Liga BBVA champions.

The title is a landmark in European football, with which the Whites not only extend their dominance of the European Cup, but also achieve something Real Madrid supporters have been dreaming of for more than a decade. The coveted 'Décima' is now in the Santiago Bernabéu trophy room and the club’s European legend continues to grow. Congratulations Champions!