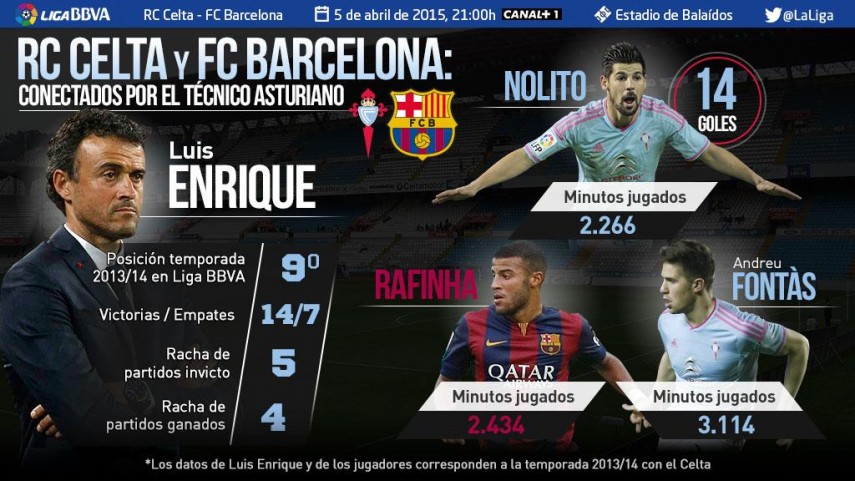 The Asturian cut his teeth as a Liga BBVA boss with the Galicians, although he has never achieved a win over them in his coaching career.

It was in the 2010-2011 season that Luis Enrique made his debut as a Liga Adelante coach in the Barcelona B dugout, on the back of a campaign with the Catalans’ reserves that had brought promotion to Spanish football’s second tier. It had been twelve years since los azulgranas had last played in the Liga Adelante.

And up popped RC Celta to ruin Barça B’s big day in the season opener, in a match that saw the Galician side run out 1-2 winners. Two years later, the Vigo team would go on to gain promotion to the Liga BBVA and, a season after that, would name Luis Enrique as their boss, handing him his first coaching job in the top flight.

It’s a story that would tie Celta to Luis Enrique and, at the same time, to Barcelona. Just a year later, this season, the Camp Nou outfit appointed the Asturian coach in the wake of his excellent work in Vigo. In his campaign at the club, Celta finished ninth – their best position since 2005-2006 – collecting eight victories, thirteen draws, a four-game winning run and periods of up to five matches unbeaten.

With Luis Enrique in charge, as many as three Barcelona youth products grew as players at Celta. After several seasons without regular football, Andreu Fontás played a total of 35 matches and more than 3,100 minutes. It was a similar case for Rafael Alcántara "Rafinha" and Manuel Agudo "Nolito", who appeared in 32 and 35 games respectively and amassed 6,000 minutes between them.

The trio had all been a part of Luis Enrique’s promotion-winning side during the 2009-2010 campaign. Now, both the coach and the Brazilian midfielder are back at Barcelona with the first team, while the other two are nailed-on starters at Celta. Carles Planas, also previously a Barça reserves player, is the other man with a blaugrana past who makes up the Galicians’ squad this year.

Celta know how to play Barcelona

During that debut season for Luis Enrique in the Liga Adelante, he was held to a draw by Celta in the teams’ return meeting. The coach again came up against the Celestes this year on matchday 10 of the Liga BBVA, in a clash that the men from Vigo won 0-1 thanks to a goal from Joaquín Larrivey. Specifically, as visitors at Balaídos Barcelona have played a total of 48 matches in recent years, with 19 wins, 13 draws and 16 victories for the hosts.

So, the current Barça boss is yet to taste triumph over the club now coached by Eduardo Berizzo. In his playing days his figures were better, though not spectacular either. He made 15 appearances against his former employers, yielding six wins, five draws and four losses. In eight seasons as a Barcelona player, he featured in nine clashes against Celta, picking up three victories, three draws and three defeats: 12 points from 27 up for grabs. Numbers that he will look to improve upon on Liga BBVA matchday 29, and stay on course for the title.