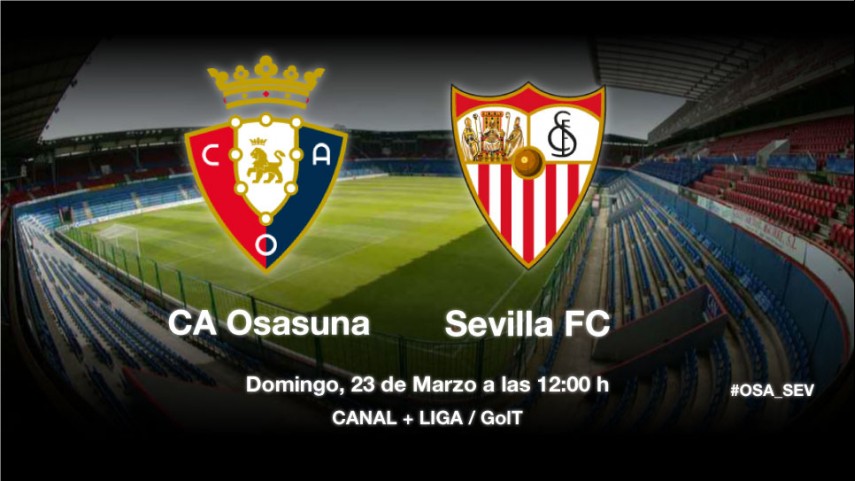 Looking for form at El Sadar

Osasuna, keen to continue their quest for survival, are facing a highly motivated Sevilla who will fight to earn three points to keep alive their bid for the European spots.

CA Osasuna and Sevilla FC go face-to-face this Sunday at El Sadar on the 29th matchday of the Liga BBVA.

The teams from Navarre and Andalusia go into the game in very different situations, with Javi Gracia's team hoping to give their supporters a victory to help them forget the 7-0 defeat at the Camp Nou last week and move away from the relegation zone, and Unai Emery's side arriving in Pamplona after their tense victory to qualify for the quarter-finals of the UEFA Europa League at the expense of their arch nemesis, Real Betis Balompié, and a run of four wins on the trot in the Liga BBVA.

Gracia, the rojillos manager, knows how important the three points are. "To survive we need to beat Sevilla. That's how we must look at the match. They are three vital points", he said. Miguel de las Cuevas will be absent for the Navarrese team.

Emery, meanwhile, will be without the injured Daniel Carriço. The Basque manager wants to forget what happened on Thursday at the Benito Villamarín and asks his players to make the extra effort to get through a difficult match. "It's a quick turnaround and it was 120 minutes plus another 10 with a lot of tension in the penalties. On top of all that, if we don't talk about Osasuna enough, we'll start to lose the match," said Emery.