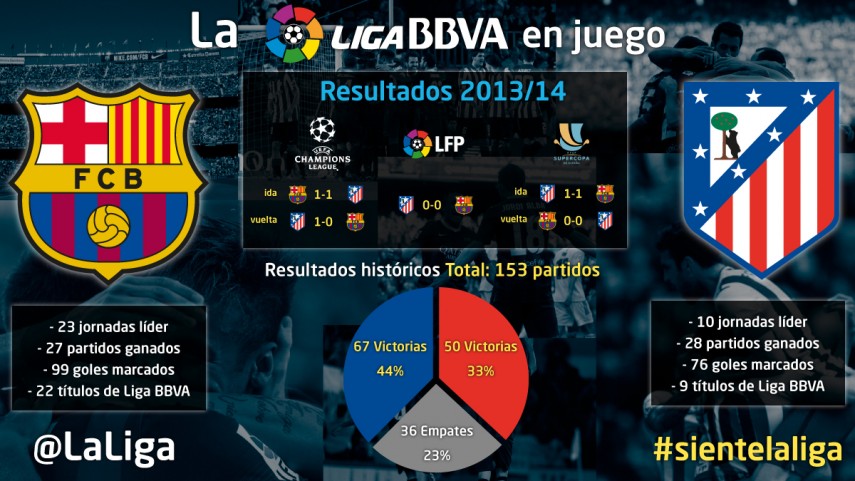 Liga BBVA is in play

Barcelona and Atlético will fight it out for the title on Saturday in one of this season’s most exciting games.

Liga BBVA is more exciting than ever. FC Barcelona and Club Atlético de Madrid will play this weekend to determine who is the league winner for the 2013/14 season. 90 nerve-racking minutes where eveness, uncertainty and heart for the fight will be the principal ingredients for the last matchday’s standout fixture.

DID YOU KNOW THAT…Equality rules in the fixtures between Barça and Atlético Madrid in 2013/14?

This season’s grand competitiveness has meant it all comes down to the final day of the season. In the five games played between the league’s top two sides thus far, four of them have ended in draws (two in the Supercup, one in Liga BBVA and another in the UEFA Champions League qurterfinals).

The only win was for Diego Simeone’s side, meaning the Red and Whites lead the head to head this season. The Madrid outfit downed the Catalans 1-0 in their Champions League return leg, knocking them out of the competition. It is a win that spurred on the side from the capital, and they will now play the final on the 24th of May against Real Madrid CF.

DID YOU KNOW THAT… In the 153 matches they’ve played in Liga BBVA, Barcelona have 17 more wins than Atleti?

Barcelona have 67 wins compared to Atlético’s 50. The 36 remaining ties all ended in draws. The Camp Nou will once again experience a magic evening as its side fights for their only chance of silverware this season. The Catalans have hosted this tie 76 times throughout the years, winning 46 of them compared to only 13 for the side from Madrid.

DID YOU KNOW THAT…The most repeated result between the two sides in the Camp Nou is 2-1?

On nine occasions in the Liga BBVA Atleti have lost by this score line in Barcelona’s stadium. In all competitions, 1-1 remains the most frequent result between the sides, with twelve such meetings finishing one apiece.

DID YOU KNOW THAT…Barcelona has occupied top spot in the Liga BBVA for 23 matchdays while Atlético have been league leaders for 10?

'Tata' Martino’s side was the undisputable leader during the first half of the season, getting off to its best ever start in the division. But Atlético closed the gap and on matchday 22 leapfrogged Barcelona to send a clear message about their intentions of winning the championship.

The azulgranas were not going to concede top spot easily though, and they climbed to first place once again although Real Madrid were also making their presence felt.

Finally, by digging deep and playing good football, the rojiblancos reclaimed their position atop the league table on matchday 29 and still hold onto it at the time of writing, with a three-point lead over their closest rivals.

DID YOU KNOW THAT…Leo Messi and Diego Costa, the second and third highest scorers in the Liga BBVA respectively, are only separated by one goal?

All eyes will be on two of world football’s standout forwards, who will be crossing paths on Saturday. With his amble talent and finishing ability in front of goal, the Brazilian will be looking to overtake Messi, who has scored on 28 occasions. But the Argentine will not make it easy for him with the title still to play for and in front of his own fans.

The Barca player has scored thirteen times in the last ten league matches, while Diego Costa, who has been hampered by some muscular problems that have prevented him from being at 100%, has hit the mark on six occasions during the same period.