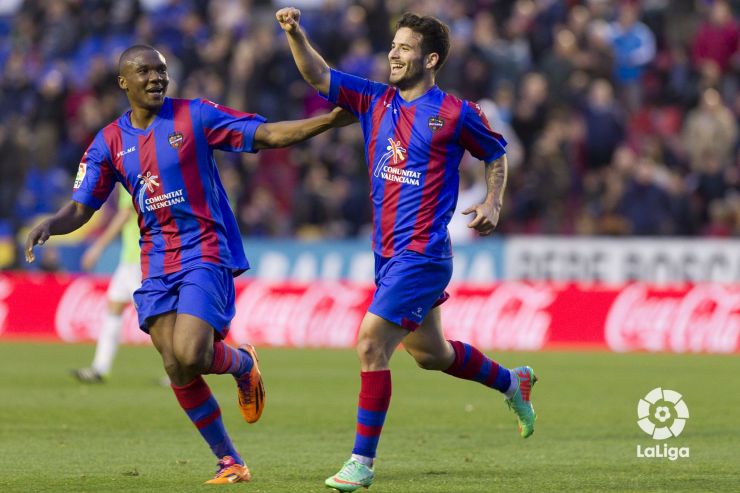 Levante continue their march to Europe

Joaquín Caparrós' continue their hot streak to move near the top end of the table. Elche, for its part, also sealed an important win to give it breathing space.

Levante UD and Elche CF saw off CA Osasuna and RC Celta de Vigo, respectively, on a relatively quiet day in the table on which Real Valladolid CF, Málaga CF, Getafe CF and RCD Espanyol could only manage a draw.

The granotas finished off CA Osasuna in the first forty minutes. An early goal from Pape Diop gave his team confidence and Rubén scored the second and final goal of the game before the break. The win leaves Joaquín Caparrós' team in seventh position with 36 points, meaning it can continue to dream of the European spots while the team from Navarre stay mid-table.

Elche also picked up three points in the match in the Martínez Valero stadium against Celta. Despite the persistence and solid football of the Galician side in the second half, Carles Gil gave the home side victory and they now sit in the middle of the table with 29 points.

For its part, Valladolid could only muster a draw against a Málaga whose rise up the table continues. Roque Santa Cruz put the home side in front but Daniel Larsson made it 1-1 and the team from Castile and Leon are in the relegation zone, three points from safety.

Getafe and Espanyol also shared the spoils in the Coliseum Alfonso Pérez. The Madrid side thus failed to get out of a rut and have played eleven matches without a win in the Liga BBVA, while Javier Aguirre's team will now have tough time reaching the European zone.