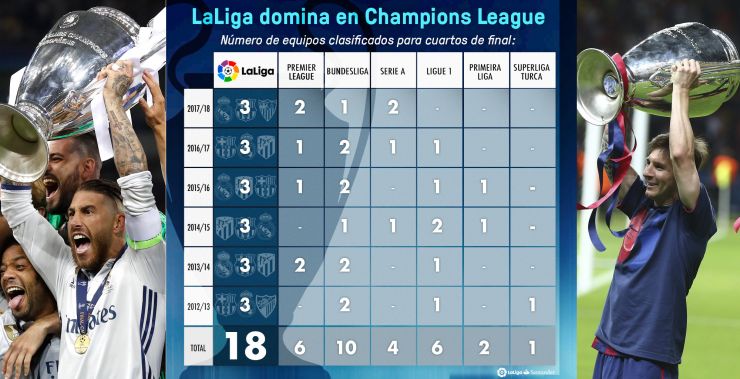 Real Madrid, FC Barcelona and Sevilla FC are all in the pot for this season's quarter-final draw.

The week's Champions League last 16 ties have brought further evidence of LaLiga’s dominance of the competition - as Barcelona and Sevilla joined holders Real Madrid in this season's quarter-finals.

LaLiga continues to be home to the best clubs and the best players in the world, with 2017/18 the sixth straight year that Spain has supplied at least three UCL quarter-finalists. No other country has had more than two teams in the last eight even once over that time.

Barcelona’s 4-1 aggregate victory over Chelsea came with Lionel Messi scoring three times over the two legs, and assisting the other goal for new teammate Ousmane Dembele. The Camp Nou side are now in the Champions League quarters for a 12th consecutive season - winning the trophy in 2015, 2011 and 2009.

Last week reigning LaLiga champions Real Madrid were emphatic winners 5-2 aggregate victors over Paris Saint Germain to reach the quarter-finals for an eighth consecutive year, having lifted the UCL trophy in three of the last four seasons [2017, 2016 and 2014].

Three goals against PSG means Blancos star Cristiano Ronaldo is the current UCL top scorer with 12 so far. LaLiga has also dominated that individual award - with either Ronaldo or Messi having been top scorer every year since 2008.

Not only Spain’s traditional powerhouses are achieving success in football’s most difficult club competition. On Tuesday Sevilla completed a richly deserved 2-1 aggregate victory over Manchester United, with forward Wissam Ben Yedder moving to 10 UCL goals this season. This comes after Sevilla have won three of the last four Europa League finals.

Atletico Madrid were surprisingly eliminated in this season’s group stages, however the Rojiblancos were UCL finalists in both 2014 and 2016. Diego Simeone’s side have since progressed in the Europa League, and are favourites to win a competition they also claimed in 2010 and 2012.

Recent seasons have also seen other LaLiga teams go far in the Champions League. Malaga reached the quarter-finals in 2012/13; Valencia were in the last 16 in 2011/12 and 2010/11. Villarreal, Athletic Club, Real Sociedad, Real Betis, Deportivo La Coruna and Celta Vigo have also taken part in football's top club competition during the 21st century.

LaLiga’s domination of the Champions League is shown in their record against clubs from other countries. Over the last four seasons, LaLiga sides have 28 wins and just three defeats in ties against sides from the Premier League, Bundesliga, Serie A or Ligue 1.

All of which means there is no doubt that LaLiga continues to dominate in UEFA competition. Teams from everywhere else will clearly be hoping to avoid drawing Madrid, Barca or Sevilla in Friday's Champions League quarter-final draw.