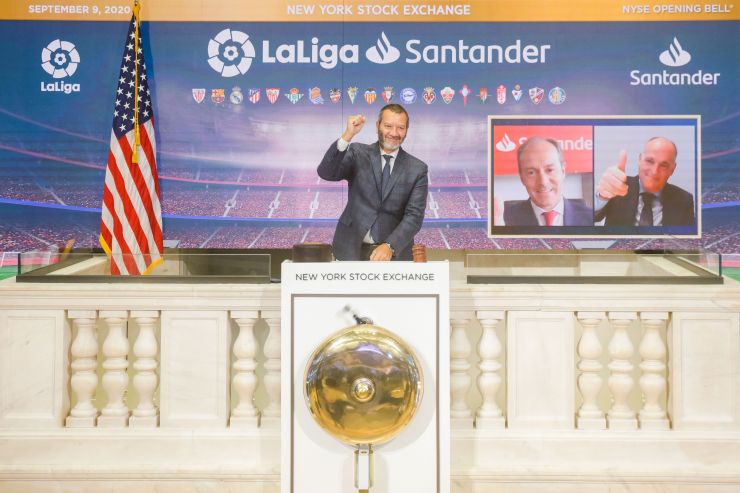 LaLiga Santander today took centre stage in the opening of the New York Stock Exchange (NYSE), with LaLiga president, Javier Tebas, and the country head of Banco Santander in Spain, Rami Aboukhair, involved in the ringing of the opening bell.

On this occasion, the NYSE bell ringing was carried out remotely on account of COVID, with the ceremony, which receives global coverage, featuring images of the crests of all of the LaLiga clubs. The event marked the first-ever participation of a European league and a Spanish sports institution in the ringing of the bell.

LaLiga's involvement, which was secured thanks to Banco Santander, serves to underline the organisation's social, sporting and financial status on a global scale, which is the result of the clubs' combined internationalisation efforts.

Indeed, the United States represents one of the prime examples of the association's internationalisation policy following the launch of LaLiga North America and the joint venture between LaLiga and Relevent Sports two years ago. In the ensuing period, the institution has developed a local strategy that has succeeded in bringing LaLiga and its member clubs even closer to supporters, whilst establishing new partnerships and revenue sources and increasing its relevance to ultimately position itself as a role model in terms of the internationalisation of a foreign competition in the country.

"We're delighted to have taken part in the virtual Wall Street bell ringing. The financial markets are Banco Santander's usual playing field and today sees us joined by LaLiga Santander, a competition which is about more than just football. It accounts for 1.4% of Spain's GDP and creates almost 200,000 jobs across the country. In short, it helps society to progress. And besides the business aspect, it's all about passion, entertainment and values, such as sacrifice, effort and teamwork, that we identify strongly with," commented Aboukhair.

"It's a source of pride for LaLiga and its clubs to virtually take part in the Wall Street bell ringing alongside our main sponsors, Banco Santander, in an event that once again highlights LaLiga's social standing, its internationalisation and contribution towards the Spain brand and the country's economy," declared Tebas.

As well as being a symbolic and highly traditional ceremony, the ringing of the NYSE bell, in the words of the financial institution itself, "is critical to the orderly functioning of the marketplace, assuring that no trades take place before the opening or after the close." Further information about the NYSE bell can be found via the following link: https://www.nyse.com/bell/history