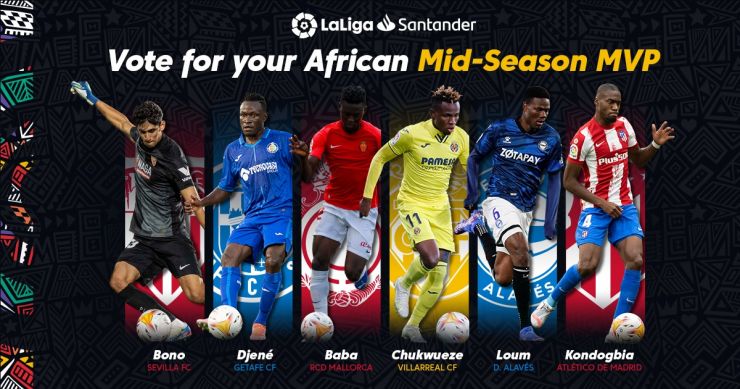 As African football takes centre stage during the 2021 TotalEnergies Africa Cup of Nations in Cameroon, LaLiga is paying tribute to the league’s African stars by launching a Mid-Season LaLiga Santander African MVP award.

This new award acknowledges the increasing importance and value of the contribution of African players to the growth of LaLiga and will be especially unique - as it will be chosen by the fans.

Football fans will be able to vote on LaLiga’s social media platforms for the African stars they felt has had the best season to date. Participating fans will get the chance to win fantastic LaLiga prizes, with the fans’ most popular choice emerging as the Mid-Season LaLiga African MVP award winner.

Some of LaLiga’s biggest African stars are representing their country in Cameroon at the moment.

One of the most influential players in LaLiga this season has been Moroccan goalkeeper Yassine “Bono” Bounou, who has played 20 games for Sevilla in LaLiga and the UEFA Champions League and conceded just 13 goals in over 1800 minutes of football, to help propel Sevilla to the lofty heights of second on the LaLiga standings.

Another Moroccan African star who has made a name for himself in LaLiga this season has been rising FC Barcelona star Abde Ezzalzouli. The Blaugrana winger has played his first minutes in the Barcelona first team this season under legendary coach Xavi Hernandez and has quickly become a fan favourite with his exciting performances.

Nigerian Super Eagles striker Samuel Chukwueze has made a welcome return to the Villarreal team - and to the LaLiga scoring charts - this season after a long injury layoff and is one of Africa’s biggest emerging stars.Chukwueze has been joined at Villarreal this season by Senegalese attacker Boulaye Dia.

Atletico de Madrid’s Central African Republic midfielder, Geoffrey Kondogbia, has become an influential figure for Diego Simeone this season and has recently scored his first LaLiga goal for the club.

Evergreen Togolese centre back Djené Dakonam continues to be a pillar for Getafe, as a leader of the squad who has racked up over 200 LaLiga appearances and who continues to inspire.

Ghana Black Stars midfielder, Iddrisu Baba, has been one of the standout performers for Real Mallorca this season on their return to LaLiga.

Deportivo Alaves midfielder Mamadou Loum is another who has made a name for himself in LaLiga this season and who is part of the star-studded Senegal Teranga Lions squad at AFCON 2021.

“Africa’s football stars have added such huge entertainment and quality to LaLiga over the years, with players such as Samuel Eto’o, Thomas N’kono, Seydou Keita, Frederic Kanoute and Michael Essien just some of those who have enjoyed great success in Spain. As LaLiga’s African audience continues to grow and the influence of the continent’s players becomes even greater, we are launching this Mid-Season LaLiga African MVP Award as just one of the ways in which we are celebrating Africa’s massive contribution to the league. We encourage fans to get involved and vote for their favourite stars who have performed consistently well in LaLiga this season,” said Marcos Pelegrin, LaLiga Southern Africa Managing Director.

Please use this link to vote for your favourite African MVP: