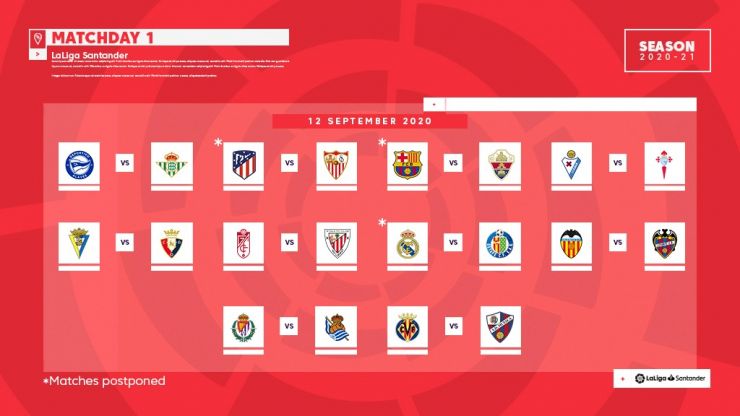 See the full calendar for the 2020/21 season, which will start on the weekend of the 12th and 13th September.

Fixtures for the upcoming LaLiga Santander season have been announced. Following today's draw, we now know match-ups for all 38 top flight matchdays across 2020/21.

The new season gets underway on the weekend of the 12th and 13th of September. During the first week, we'll see the returns of newly promoted clubs Cadiz CF and SD Huesca, plus big matches such as the derby between Valencia CF and Levante UD at Mestalla. Atletico Madrid v Sevilla FC, FC Barcelona v Elche CF and Real Madrid v Getafe will be postponed due to the clubs' involvements in European competitions and the LaLiga SmartBank play-offs.

The Seville derby (El Gran Derbi) Real Betis and Sevilla FC will kick-off the new year on the 2nd/3rd January at the Benito Villamarin, with the return on March 13th/14th, and the Madrid derby between Real Madrid and Atletico Madrid is scheduled for December 12th/13th and March 6th/7th, the return fixture at the Wanda Metropolitano.

* The following fixtures are postponed to dates available later in the calendar:

** The games corresponding to Matchday 19 for the clubs participating in the Supercopa de España will be played on 15/16 December 2020 (FC Barcelona, Real Madrid, Athletic Club, Real Sociedad)