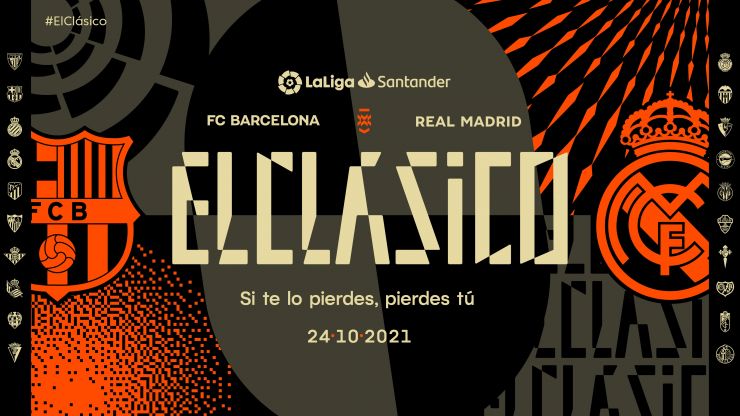 The world’s most iconic club match will now have its own logo and visual identity. Rivalry, strength, passion, technology, innovation, dynamism, entertainment and globality are among this new image's main attributes.

LaLiga has created a logo and brand identity for ElClasico, the match that pits FC Barcelona and Real Madrid against each other each season, with the aim of giving one of the most iconic and popular sporting showdowns on the planet a unique and highly recognisable visual identity.

The branding project’s aim is to reflect the DNA of what this legendary encounter symbolises: rivalry, strength, passion, technology, innovation, dynamism, entertainment and globality.

Always at the cutting edge of innovation and entertainment, this new image will be yet another asset in LaLiga’s bid to enhance the brand value of its competition and its clubs, which can be featured at all international events and activations held around this match as part of LaLiga’s internationalisation strategy.

This initiative shows LaLiga to be looking to the future once again, working more closely with clubs to promote the competition and its most iconic matches, including not only ElClasico but also El Gran Derbi, El Derbi de Madrid, El Derbi Vasco, among others.

Watched in every corner of the planet, ElClasico is LaLiga’s blockbuster par excellence that puts life on hold; it is the most watched club match globally. An encounter that everybody watches, that brings everybody together, whether they like football or not, and a cultural touch point that transcends borders.

LaLiga is preparing a major launch of this new visual identity to coincide with the next ElClasico, set to be played in October. It will be implemented across all media outlets and actions that LaLiga rolls out, both nationally and internationally, through promotions, digital and media campaigns, international media activations, press conferences, and international events.

Just last week, LaLiga won the International Creativity Award at this year’s Sports Industry Awards for its unique ElClasico campaign, highlighting its diverse and highly adaptable events in all four corners of the world during the pandemic. The award was also a reflection of LaLiga’s wider work in promoting ElClasico in recent years.

The design of ElClasico’s identity

This is a groundbreaking, young, exciting, football-loving, and visual image that will connect with a global audience and especially among a young demographic. Its style is reminiscent of the digital environments popular among younger audiences and their passion for eSports, TV shows and urban culture. A visual identity that conveys not only the today, but also the tomorrow of a great sporting and entertainment show that brings the world to a standstill for 90 minutes.

ElClasico’s new logo draws its inspiration from the shared emotion that exists between footballers and fans the world over. It is an inclusive brand that does not set a distance between the stars and their supporters, but rather brings them closer together and helps fans feel that they are very much an integral part of the game.

Custom typography has been used to create this new identity, with an energetic style, sharp angles and verticality to express movement, dynamism, and its digital essence.

The symbol that separates Real Madrid and FC Barcelona will replace the usual "vs." and will be the icon that best represents ElClasico. It represents rivalry, strength, and confrontation, evoking the competitive spirit of both teams.