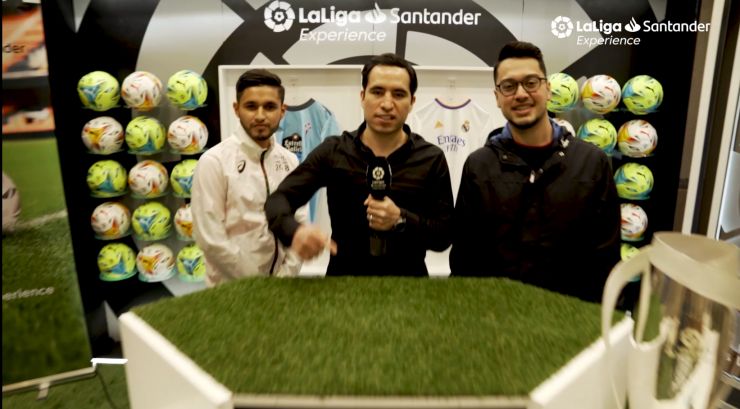 #LaLigaExperience's guests have enjoyed such an amazing days in Vigo!

#LaLigaExperience's guests have enjoyed such an amazing days in Vigo!

Vigo welcomed representatives from official LaLiga broadcasters SKY Mexico and D-Smart Turkey and the LaLiga Ultimate Xpert and LaLiga Ultimate Challenge competition winners in the build-up to the blockbuster bout between the Celestes and the Merengues.

The special guests descended on the Galician city full of energy and brimming with excitement to take in the LaLiga Santander showdown and were treated to a bumper schedule of activities ahead of the eagerly anticipated bout.

The competition winners, Ricardo and Gabriel, who hail from Mexico, and Ahmet who flew in from Turkey, took to the media room to be officially unveiled as the new incumbents of the RC Celta hotseat under the watchful eye of journalists Julio Hernandez (SKY Mexico) and Engin Kehale (D-Smart Turkey), who acted as members of the duo’s coaching staff. To mark their appointment in the Celta dugout, the rookie managers received a shirt signed by the first-team squad.

The press conference got the ball rolling on this fun-filled experience, which continued the following day with a trip to Celta’s Afouteza training ground, where the VIPs got the chance to catch up with Iago Aspas, Denis Suarez and Orbelin Pineda, who chatted with the guests and posed for photos to immortalise this truly unforgettable moment.

The next stop on the adventure was Celta’s ABANCA Balaidos home, where the guests were able to set foot in both teams’ dressing rooms and even venture down to the hallowed turf, which just hours later would be graced by their heroes as Celta locked horns with Real Madrid.