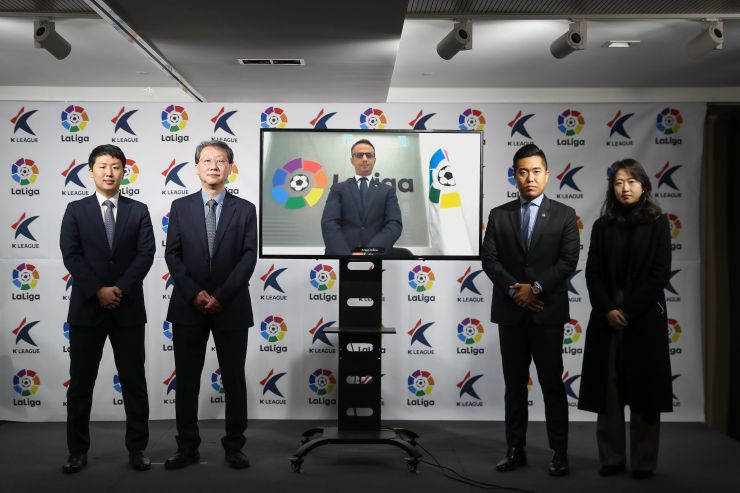 The Spanish and South Korean leagues have signed an MOU that will unite both competitions until the end of 2023 and that will promote exchanges on sports projects, economic control and the fight against audiovisual piracy, among others.

LaLiga and the K League have carried out, in Seoul, the signing of the MOU that will unite both competitions until the end of 2023, which represents an important advance in the collaboration between both leagues and it will open up the current relationship to a deeper cooperation in matters such as anti-piracy, development of sports projects and training programs or the creation of an economic control mechanism for the K League and its clubs.

“For LaLiga, South Korea is a strategic country due to its history and the evolution of its football. Korean clubs are at the forefront in Asia and being able to join forces with the K League is an unbeatable opportunity to contribute to their growth and continue our joint learning”, Sangwon Seo, LaLiga delegate in South Korea, said.

”We are thrilled to commence this partnership with LaLiga. The MOU with LaLiga will bring a great opportunity to drive not only their business collaboration but raise each other to even greater heights. We look forward to what our long-term and mutual partnership will bring to all parties and believe  this will allow to further promote and share the future and development of football.”, Yeong-Sang Cho, General Manager of the K League, said.

This event was followed by the announcement of the collaboration agreement reached between Cadiz CF and the K League 2 squad, Chungnam Asan, by which the Spanish club and the South Chungcheong pronvice club will establish ways of collaboration in fields such as the management of sports entities, educational football and promotion of joint events.

“This MOU with the K League and the agreement between Cadiz CF and Chungnam Asan are excellent examples of the commitment of LaLiga and its clubs for the growth of football around the world. Being able to establish bridges and exchange knowledge and experiences through them is one of our great objectives within our international strategy”, Ivan Codina, LaLiga managing director for South Korea, Japan, Australia and Southeast Asia, added.

Cadiz CF's president, Manuel Vizcaíno, highlighted "the importance of this agreement to continue with the international expansion of our brand, led by LaLiga. This alliance is the first of which we hope to continue in the future in Korea and the Asian countries".

The signing ceremony was attended by the Secretary General of the K League, Oung-Soo Han, and the delegate of LaLiga in South Korea, Sangwon Seo. In addition, Ivan Codina, LaLiga director for South Korea, Japan, Australia and the Southeast Asia, joined online and congratulations messages from the president of LaLiga, Javier Tebas, the South Korean player of Valencia, Kang-in Lee, Osmar Ibañez Barba, Spanish player of FC Seoul were displayed.

With the signing of this agreement, LaLiga continues with its double objective of increasing its presence in South Korea while joining forces with South Korean organizations and institutions to support the development of soccer in the country.