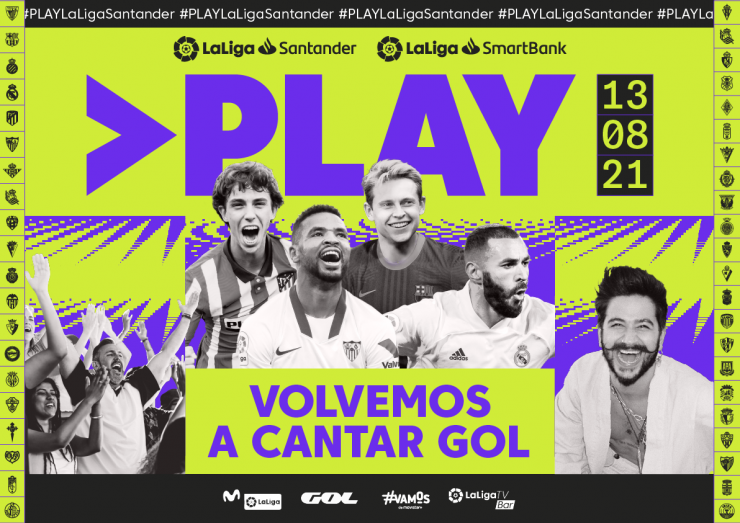 Football and music come together to celebrate the excitement around the return of fans to LaLiga stadiums. #PlayLaLigaSantander is the slogan of the new campaign starring the Colombian superstar.

The 2021/22 LaLiga Santander and LaLiga SmartBank season gets going on 13 August, a season which will see the return of fans to stadiums across Spain. LaLiga is turning to music to build up the emotion ahead of the kick-off and has presented the season’s official song, KESI LaLiga Versión Oficial, with the collaboration of international singer-songwriter, musician and producer, Camilo.

Fans will take centre stage this season with a view to reaching a younger audience and continuing to carry the emotion of LaLiga football and its clubs to all four corners of the planet, connecting through the immense power of music and the passion evoked by the greatest sport on earth.

Football and music, united by emotion

If there is one thing that LaLiga Santander and music have in common, it’s the passion they generate. Football is capable of moving people, just like music, and they are powerful tools for triggering all kinds of emotions. Together, the two are unstoppable.

For the new season, LaLiga wants fans across the world to revel with Camilo’s music, so the Colombian singer-songwriter created a football-infused version of his hit song KESI. This Camilo and LaLiga remix, KESI LaLiga Versión Oficial, celebrates the return of fans to stadiums in Spain and the chance to celebrate goals week in, week out once again.

Camilo is one of the most influential artists in Latin music, having won some of most prestigious awards in music, including a Latin GRAMMY® and a GRAMMY nomination®. He is the most followed Latin artist on TikTok with more than 23M followers, more than 22M followers on Instagram, and over 6 billion views on YouTube. In addition to making a remix of one of his most successful songs for this new season, Camilo launches a new challenge for La Tribu, encouraging his fans to dance to LaLiga’s song in unison on social media and everywhere the song is played.

"It's a dream come true for me to be involved in the LaLiga song for the 2021/22 season. This is the first tour of my life and the first concerts have been in Spain, a country that has really made me feel at home," said Camilo. The singer-songwriter also said that "music and football are one; the passion of singing a song and celebrating a goal go beyond the rational. It makes you connect with the here and now and completely forget everything else. It's a magical moment."

#PlayLaLigaSantander is the slogan of the new LaLiga campaign, incorporating entertainment, technology, and emotion. It reiterates LaLiga’s ongoing commitment to reaching and engaging with a younger audience through the power of music and football.

"Thanks to LaLiga's efforts to adapt its content, fans under the age of 24 have grown by 10% in Spain since 2017. Fans are finally returning to stadiums in Spain and this season we were in no doubt that Camilo was the artist who could best help LaLiga get this emotion across to the public," says Eva Lopez, LaLiga's Global Brand director. "Our objective is to unite fans around the heartbeat of football, and now through music as well.”