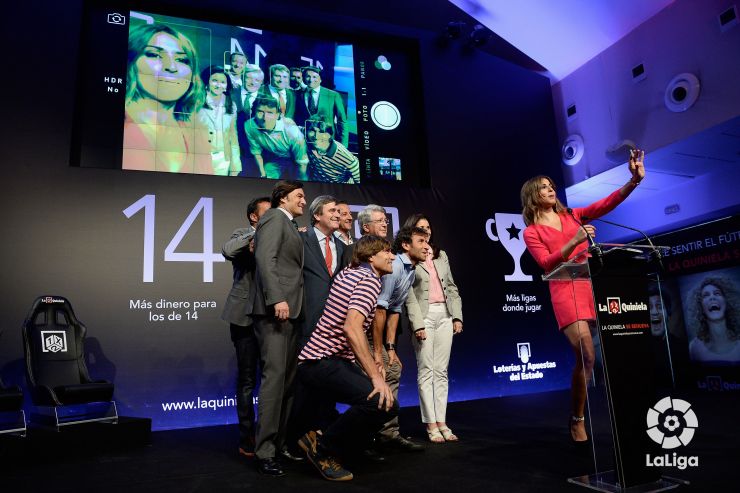 The Estadio Vicente Calderón hosted the presentation of the new Quiniela, which starts again on 24 August with new prizes of millions of euros and countless new features.

La Quiniela will continue to be tied to football in the season that is about to begin. The new Quiniela with millions of euros of prizes was presented on Monday. The presentation was held at the Vicente Calderón and attended by the president of the State Lottery, Inmaculada García, the Secretary of State for Sport, Miguel Cardenal, the president of Atlético de Madrid, Enrique Cerezo, and the director of marketing of the Liga de Fútbol Profesional, Adolfo Bara.

The event, which was hosted by presenters Noemí de Miguel and Juanma Castaño, opened with the presentation of the new features. The president of LAE said that La Quiniela is a synonym of tradition. "It should have a leading place in football. We would like to continue being the leading sports betting service for all Spaniards", stated Inmaculada García.
"The lottery is the engine that drives national sport. La Quiniela has made Spanish football great. The best league in the world has the best pools in the world", argued the president of CSD, Miguel Cardenal.

Alfonso Bara, director de marketing de la Liga de Fútbol Profesional, thanked the LAE for the collaboration on the project for technological innovation as he presented the app 'La Quiniela en vivo' (The Pools Live). "It runs very well and we’re convinced that it will suit the needs of the fans who have not previously bet on La Quiniela".

La Quiniela, which starts along with the new season on 24 August, will have even greater prizes, and offer millions of euros more in its pots, meaning it is still the leader par excellence of sports betting. Anyone who gets 14 right will receive more money for their bets while a sweep of 15 will be even more valuable and completely new. Now, it will consist in correctly predicting the number of goals of each of the participating teams.

The innovative ‘La Quiniela en vivo’ game, which offers the option of validating a ticket on a mobile, tablet and other devices, was also on show. In addition, international matches in the best European leagues, which are of interest to Spanish fans, will be included. The price of bets will be the same as in previous seasons, 50 eurocents per bet.