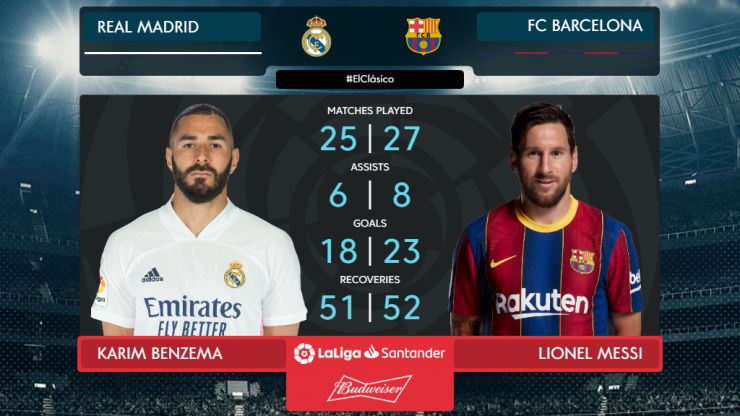 The countdown has begun for the clash of the titans – this season’s second LaLiga Santander ‘ElClásico’. In true Budweiser style, Messi and Benzema will be vying to see who'll be crowned “King of ElClásico” in this critical showdown. Read on for more!

It’s time for one of the most eagerly anticipated moments of the season, the match to end all matches, the event that the whole world stops to watch. It’s not just a game between two historic rivals, but also between two teams replete with individual talent and great goalscoring prowess.

If we had to single out two players whose skills and knack of converting chances have stood out in this campaign, these would be Leo Messi and Karim Benzema.

FC Barcelona striker Lionel Messi isn’t just leading the scoring charts for his club, he’s also top of the table in the league, notching up 23 goals in LaLiga Santander in 2,303 minutes. The Rosario-born legend’s position in the team is undisputed, having featured in 27 games so far and started all but two of them.

As for Real Madrid, they boast Karim Benzema, who is Los Blancos’ leading marksman and who sits in fourth place in the race for the Pichichi accolade, with 18 strikes to his name. He has played a total of 2,203 minutes and has become an essential part of Zinedine Zidane’s masterplan, starting all 25 games he has featured in this campaign.

These are two exceptional individuals who leave their mark every time they take to the field, who relentlessly find the back of the net and who are simply undroppable for their clubs.

Yet what they offer as footballers differs substantially from one another, with the Frenchman and Argentine possessing contrasting skill sets, dribbling techniques and shooting abilities. Let’s analyse these two footballing kings in greater depth.