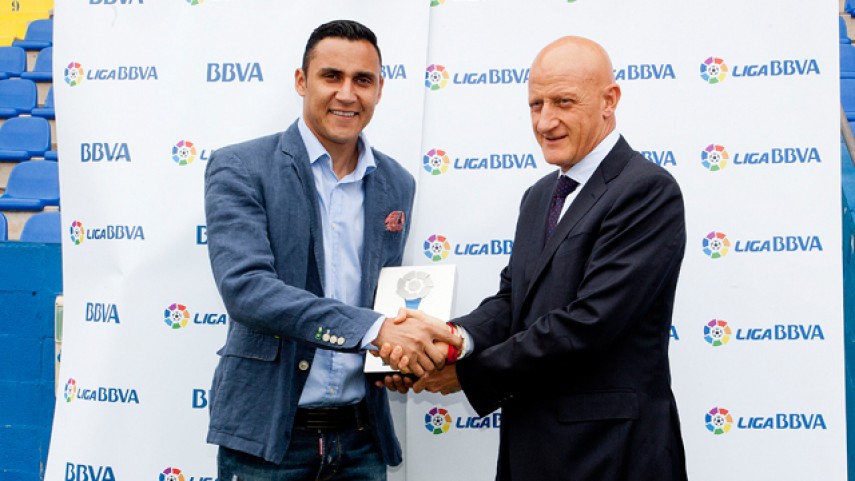 Keylor Navas, Liga BBVA player of the month for March

The Costa Rica goalkeeper has been named the league’s best player for his bravery and performances in between the sticks for Levante.

Keylor Navas of Levante UD has been given the BBVA Prize for March’s player of the month in Liga BBVA by the Liga de Fútbol Profesional’s principal sponsor.

The magnificent season that Keylor Navas is enjoying between the sticks at Levante isn’t escaping anyone. With an average of one goal per game, the Costa Rica goalkeeper has let in 36 goals in 31 games in Liga BBVA this season, and has been a real breakthrough player in the competition.

"This year has been important for me. I've worked a lot and the results have come little by little. I thank the Liga BBVA for this prize because it's something that motivates me, it serves as a reference point and helps me to know that I am improving and I have to continue in order to achieve my dreams", said Keylor Navas.

March was additionally a brilliant month personally for Navas. In the six games he played for Joaquín Caparrós’ side, the man from San Isidro let in only seven goals and helped his side earn six more points in their fight for survival.

Keylor Navas is one of the key players for the Valencia side. The incalculable amount of points that the goalkeeper has earned his side is synonymous of the importance of the goalkeeper both the fans and his teammates. These are all reasons why he merits the prize for March.