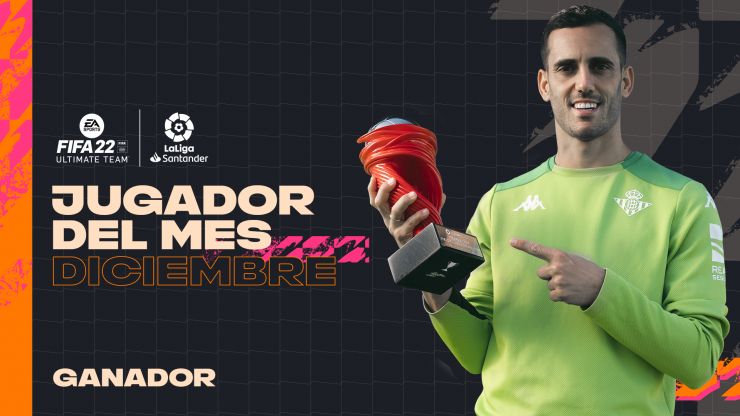 Juanmi named LaLiga Santander Player of the Month for December

The Real Betis striker has scooped this award after starring in the latter stages of 2021 for his side, which has seen the Andalusians rise to third in the table

Juanmi Jimenez has won the LaLiga Santander Player of the Month award for December. R.Betis’s marksman has played a key role in his team’s ascension to third place in the league standings and is now the focal point of coach Manuel Pellegrini’s attack.

Betis enjoyed a stellar end to the year, winning two out their three matches. They picked up an impressive away win over FC Barcelona and thrashed Real Sociedad in what was one of the Andalusian’s best performances so far this campaign. The only blot on their copybook was falling to a 3-2 defeat against Athletic Club. Juanmi was a leading light in all three games, finding the net in each one of them and playing a pivotal role in Betis’s attack.

Juanmi’s goalscoring instinct has seen him become his team’s top marksman, having struck 11 times so far this term. It makes him the top Spanish scorer in LaLiga and second overall in the rankings, with only the mighty Karim Benzema ahead of him. That said, Juanmi offers much more than just goals; his movement off the ball is crucial in Betis’s approach, as is the chemistry he has with his teammates. This has made him almost undroppable for Pellegrini; in fact, only five players have played more minutes for Betis than the 28-year-old.