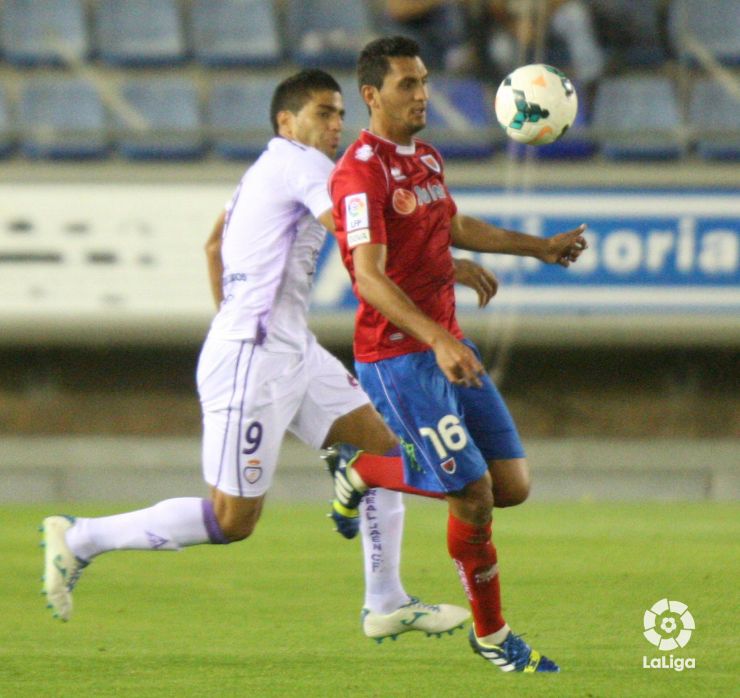 Numanica’s Canarian defender prepares himself for this weekend’s match against Las Palmas, the team he began his professional career with, as he discusses exclusively with LFP.es.

Juanma Marrero returns home. But he does so wearing red and as one of Numancia stalwarts, a team he has been with for the last year and a half, and where he has become a fans’ favourite. "I’m happy in Soria, and that is reflected on the pitch", he declares with a smile.

The centre back began playing in the UD Vecindario youth academy, but really blossomed as a footballer with Las Palmas. This weekend he returns home to his people and will have to try and stop his former team mates in the Gran Canaria Stadium, where he celebrated promotion to the Liga Adelante in 2007. "I lived so much with Las Palmas that it will always be a special match for me, no matter who I’m playing with", he confesses. And he’s especially looking forward to it this time round: "I can’t wait for it. Above all else because it’s snowing here and is absolutely freezing!".

Juanma is not the only person counting down the days to this match, his friends and family are also waiting for Saturday’s 7pm kick off with bated breath. "People have been ringing me all week to say that they’ll be there, but I hope they come to support me and Numancia", he laughs. "We need to win and pick up all three points in order to get the season back on track".

The Soria outfit hasn’t got off to a great start in 2014. The team has only managed to pick up three points from a possible 15 and is yet to win at home since the beginning of the New Year, but the defender is confident that is just a question of time for things to start clicking again. "The thing we are struggling with most is scoring goals. We aren’t playing badly, we’re battling hard and creating chances, but the ball refuses to go in", Juanma assures us.

On the topic of promotion to the Liga BBVA, he is also very clear: "The main aim is to ensure safety in the division. That’s what we have set out to do from the get go. After that if we have the luxury of fighting for a different objective, that’s what we’ll do".

Up next they face Las Palmas, a side Numancia has failed to beat in Gran Canaria since the 2007/08 season. "Coincidentally we haven’t won there since the promotion year, so fingers crossed there’s a similar outcome this time round", he states. Juanma’s contribution to the team will be fundamental if they are to win this weekend.

One of his duties will be to look after Juan Carlos Valerón, a living legend in the Canary Islands. "I know him personally and it is always a privilege and an honour to play against him. He’s a marvellous person and an excellent footballer. I remember watching him on TV playing amazingly in the Champions League. I now I’ll have to mark him", he says enthusiastically.

Juanma wore the Canary Island side’s famous yellow kit for five seasons, between 2003 and 2008, and still has plenty of anecdotes about his time at the club. "I originally signed for the reserves but quickly made my way into the first team because Paqui Veza was injured, but that was the same season we were relegated to Segunda División B (the third division). We were rooted to the bottom of the table throughout the campaign and hadn’t a chance of avoiding the drop. That was a very tough year. However, it was incredible when we returned to the Liga Adelante two years later. The whole island celebrated, I’ll never forget it".

Now in Soria, the 30-year-old recognises that on a professional level things are going very well. "This is the best moment of my career. The stats speak for themselves and, when someone is happy and enjoys what they’re doing, they play with more freedom and perform much better as a result", he affirms.

Last season he scored seven goals and this season he is one of the first names on Juan Antonion Anquela’s team sheet. "I play all the games, I feel love from the fans and I’ve just renewed my contract with the club. Had I known I’d get on so well at Numancia, I would have come sooner", he says with conviction.