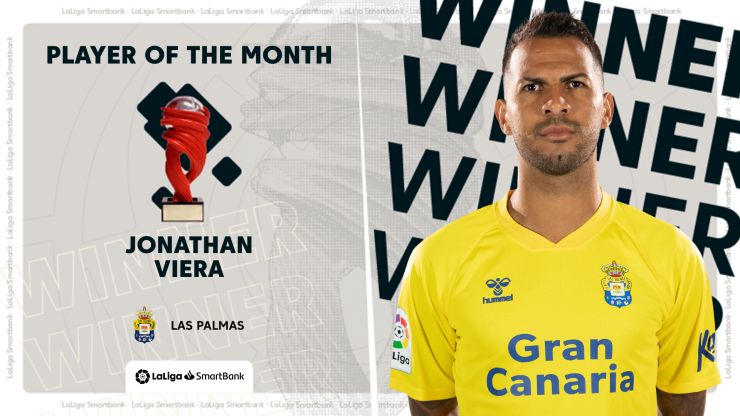 The UD Las Palmas captain scoops this award after enjoying a stellar month in which he scored a brace and provided an assist, playing a vital role as the Canary Islanders climbed to third in the league.

Jonathan Viera has been named October’s LaLiga SmartBank Player of the Month. UD Las Palmas' skipper contributed to his side’s cause with some excellent midfield play, chipping in with important goals and assists. The Canarians have enjoyed a great start to 2022/23, holding on to a top-three spot for the last 12 matchdays while being the league’s leaders for six of these. They currently sit third on 26 points, garnered from seven wins, five draws and two defeats.

The injury which saw Viera miss the early stages of the season has long since been forgotten, and the 33-year-old has once again proved himself to be a crucial cog in Las Palmas’ attacking machine. He’s scored three goals and provided two assists so far this campaign, placing him as the club’s second-highest goalscorer.

Viera opened his account for the season against Granada CF and also struck against CD Mirandes and FC Cartagena. His goal against the latter saw the Canarians beat their opponents in the 92nd minute, keeping their unbeaten run at home intact. Overall Las Palmas enjoyed an impressive month, picking up 12 out of a possible 18 points and only falling to defeat in their last match of October against Huesca.