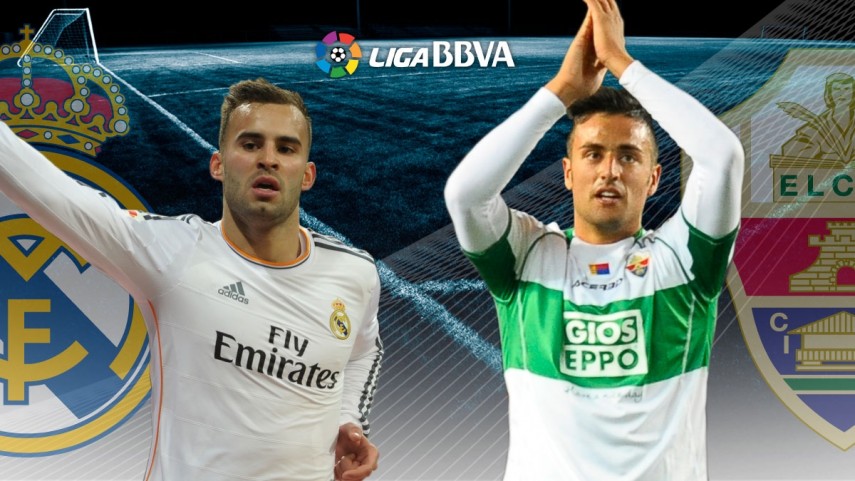 Two of the Liga BBVA's most promising players, who learned their trade at Real Madrid and Elche, respectively, will square off in the Bernabéu on Saturday.

The presence of a youth-academy player in a team is always significant. Two of the names making the biggest waves in the Liga BBVA are strikers Jesé Rodríguez (Real Madrid CF) and Cristian Herrera (Elche CF). Coming into Saturday's game at 16:00 in the Bernabéu, Jesé has five Liga BBVA goals under his belt and Cristian three.

They are a reflection of the fans' enthusiasm and emotion on the pitch. Great performances when they were given their chance led both Carlo Ancelotti and Fran Escribá to take note, and they are now enjoying leading roles in a number of matches.

Jesé Rodríguez, apart from the five goals he has scored in the Liga BBVA in 487 minutes, has scored three more in the Copa del Rey, and is now two goals behind one Real Madrid's most famous youth-team graduates in his first season with the first team, Raúl González Blanco. His first goal came in the Camp Nou against FC Barcelona and, from there, Valencia CF, Athletic Club, Villarreal CF and Getafe CF have proved to be worthy victims. His goals against the last three came in consecutive games.

The man whose opinion matters most, Carlo Ancelotti, and the main architect of Jesé's opportunity to play for the first team, has stated that he has "amazing talent" and that "it comes as no surprise, he is an important player for us and he is doing very well", heaping praise on the player. This is proving to be his breakthrough into the elite.

Elche's striker, Cristian Herrera, has scored three goals in 377 minutes. His move from Elche Ilicitano to the first squad became permanent in November. His debut was a resounding success and the Canary Islander ably demonstrated the quality he possesses. All he needed to score his first Liga BBVA were five minutes against Valencia CF, which also helped his team to three points. His goals have carried great importance, as he found the net against Sevilla FC in his side's draw with the Andalusians and, two matches later he produced the 1-0 victory against UD Almería, providing his team with a total of seven points.

Playing in the Liga BBVA and keeping a place there is no mean feat, and Cristian Herrera is well aware that he can only continue at this rate by working hard every day and, above all, by being cautious: "I have to keep doing the same thing, working hard, with my feet on the ground, step by step and let's hope I can give the fans more things to cheer about", said Elche's forward.

The youth and ambition of these players are representative of all the academy players who work their way up through the youth systems to become role models for younger players. These two great strikers from the Canary Islands, Jesé Rodríguez and Cristian Herrera, have begun to forge a future for themselves that looks very promising indeed.