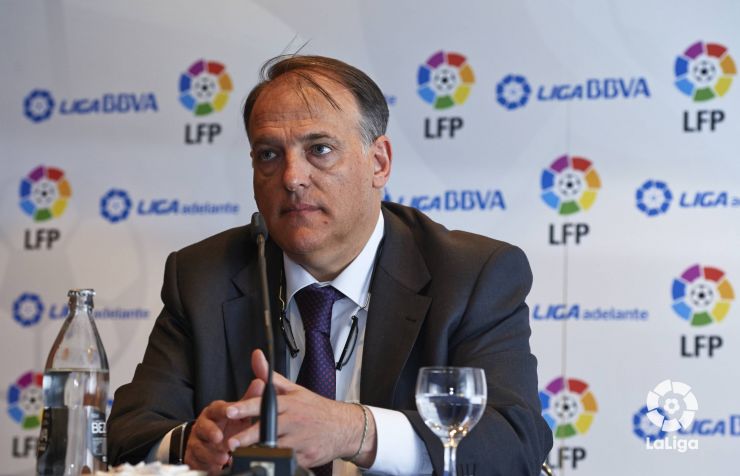 Javier Tebas: "We will look into ways of detecting the people behind acts like the one in Villarreal"

The president of the Liga de Fútbol Profesional gave a press conference after today’s General Assembly in Valencia.

Javier Tebas gave a press conference after today’s Extraordinary General Assembly in Valencia. The president of the Liga de Fútbol Profesional went over some of the issues discussed earlier in the day, among them the work done on the anti-piracy campaign started two weeks ago, the LFP World Challenge, which he described as an "event with exceptional public interest, which will allow us to internationalise smaller Spanish clubs", as well as the soon-to-be-signed deal with Twitter to promote the Liga de Fútbol Profesional.

In relation to the absences of Valencia and Real Betis, who did not attend the Assembly, Tebas declared that "they said they weren’t coming, and they didn’t", and also pointed out that the absence of the two club presidents "is a personal failure as I was not able to convince them that the decision about the time change was the right one". Javier Tebas insisted that while he was hurt at the fact they didn’t come, he respects their decision. On top of that, the LFP president stated that "all the club representatives come to the Assembly to contribute. We come to work, not to discuss club politics".

The press in attendance asked the president about the tribute Villarreal fans will be paying next week in the Madrigal, to which Tebas responded that "the ceremony is designed to recognise the people who kept calm and behaved in a dignified manner". Tebas recognised that the Liga de Fútbol Profesional "is concerned about a depraved act that could have caused a catastrophy". The president of the LFP pointed out that "we can’t search everyone who comes to a stadium but we will look into ways of detecting the people behind acts like this" in reference to the smoke bomb thrown onto the pitch during the match between Villarreal and Celta. Furthermore, the LFP has a budgetary allocation to cover unforeseen expenses incurred by fans that result from schedule changes.

Finally, the president of the LFP wanted to be clear in relation to the Neymar case. “FC Barcelona has requested documentation in order to know if they comply with the economic protocol controls and we are waiting to see if there will be an opening of a financial dossier” which would carry a fine of somewhere between €60,000 and €300,000.