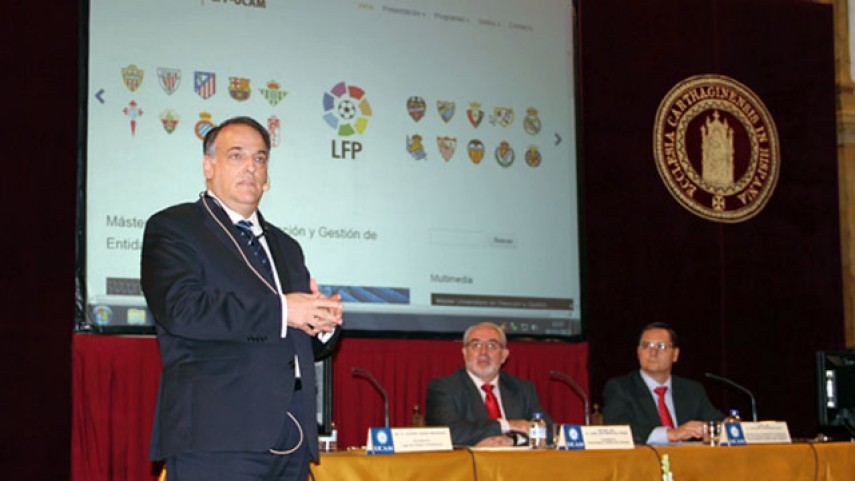 The president of the LFP gave a speech to students of theUniversidad CatólicaSan Antoniode Murciaentitled 'Economic and sporting fair play in professional Spanish football'.

The temple of the Hieronymite Monastery, the headquarters of the Catholic University San Antonio in Murcia (Universidad Católica de Murcia orUCAM), was the setting for the first 'Sports Management Institute LFP-UCAM' discussion, an initiative that came to fruition thanks to the collaboration between the educational institution and the Liga de FútbolProfesional.

José Luis Mendoza, the UCAM president, and Javier Tebas, president of the LFP, were both pleased with the results of the new initiative. "We want to express our gratitude to Javier Tebas for taking part in this project, the main objective of which is to bring professionals from the world of sport together", José Luis Mendoza declared. Javier Tebas, meanwhile, stated that the 'Sports Management Institute LFP-UCAM' has begun and is now a reality: "Last week we reached an agreement in Bali, that presentation was a necessary step and now we will continue on this path".

Making the most of his time in the Universidad Católica de Murcia, Javier Tebas gave a speech to Physical Activity and Sports Science, Communication, Business Management and Law students, entitled 'Economic and sporting fair play in professional Spanish football' in which he spoke about the LFP’s past endeavours and the work that is currently being carried out to shorten the financial gap, reduce debt and fight against fraud.

In terms of the debt in Spanish football, Tebas highlighted: "The debt of LFP clubs stands at €3.6 billion while the revenues stand at €3.2 billion. The problem is that these figures include the two biggest clubs (Real Madrid and Barcelona). Not including them, the debt stands at €2.6 billion but the revenues stand at €1.6 billion. This is a significant gap and has forced many clubs to go into administration".

In relation to television rights, Tebas reminded those in attendance that"the Liga BBVA and the Portuguese leagues are the only two in Europe that don’t negotiate television rights collectively. As a result each club negotiates on its own, while in countries like England, Germany and Italy it is the league that handles television deals". In this respect he made assurances that work will be done to shorten the gap between those who earn the most and those who earn the least: "In 2009 the difference between the biggest and the smallest was 13 to 1. Currently it stands at 6.5 to 1 and we are working to reduce that to 4.5 to 1". Despite that, the president of the LFP still thinks there is lots of work to be done: "The English Premier League generates €2.2 billion in television revenue while in Spain that figure is just €800 million. The difference is that in England there are 10.8 million paying television subscribers, while there are only 3 million in Spain".

Another important aspect to his mandate as LFP president is the fight against fraud. In this respect he announced that the LFP has created a new department designed to detect possible fraudulent behaviour. "It is essential to fight against deception but we also want it to be known that we will dissuade those who think they have impunity", he stated.

To close the ceremony, Javier Tebas joined up with José Luis Mendoza and Antonio Sánchez Pato, the deacon of the Physical Activity and Sports Science Faculty (CAFD) to celebrate the graduation of Sports Business Management masters students. This is the first masters program to be integrated with the 'Sports Management Institute LFP-UCAM', and will have an international version in Peru. This is the first step for the project which will broaden horizons with new courses and new centres in the future.