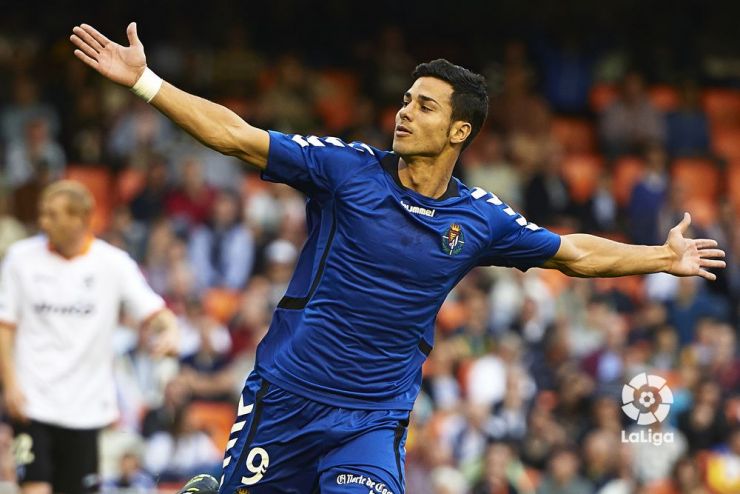 Javi Guerra: "I am in the form of my career"

The Valladolid striker has found the net eleven times in the Liga BBVA. He spoke to LFP.es about the atmosphere at the club coming into the match against Atlético de Madrid.

After six seasons in the Liga Adelante, along with two Liga BBVA matches with Valencia CF in the 2006/07 season, Javi Guerra is firing on all cylinders in the top flight and, at 31 years of age, he is in the form of his life. With eleven goals this season, the forward from Vélez (Malaga) discusses Real Valladolid CF and Club Atlético de Madrid (who they visit on Saturday) with LFP.es and gives his opinion on the favourites for the title and on staying up in the Liga BBVA. Valladolid's deadliest weapon, Javi Guerra, speaks.

LFP.es: Before entering the final stretch of Liga BBVA you have already racked up more goals than last season. Is it your best spell in the game?
Javi Guerra: It is true that last year I struggled a little to settle down in the top flight. Expectations were very high [he was coming off the back of scoring 20 goals in the Liga Adelante in their promotion-winning season]. Last year I finished the season well and this time I have been on a goal-scoring streak and it is true that I am in the form of my career.

LFP.es: Perhaps the best word to describe your career is 'consistency'. Hard work and now in your thirties you are one of the top goal-scorers in the Liga BBVA.
Guerra: That word would describe me. It is true that I have had to work very hard and make many sacrifices to get to this point, but above all never giving up the fight. I have progressed little by little, but a have always moved towards my goal.

LFP.es: Despite the fact that Valladolid is in the relegation zone, the fight to stay up is still very much alive. You are three points from safety and five from RC Celta de Vigo, who are eleventh in the table. What are your thoughts on that battle?
Guerra: There are seven or eight teams in the fight, I think we have come through a bad patch in previous matches and, although we have a complicated schedule, we are confident that we can string together some positive results in order to give ourselves some breathing space, get some confidence back and continue with last year's philosophy while controlling the game a little better.

LFP.es: What are your thoughts on the visit to the Vicente Calderón on Saturday?
Guerra: It is a very difficult trip, above all for the strikers who play against Atleti, who barely touch the ball in the whole game. They have such a great defensive system, Simeone has imparted aggression and determination to fight for every ball and the group has taken it on amazingly well. They are in the midst of a great period and up front they have Diego Costa, who practically scores every time he touches the ball, he is a constant danger.

LFP.es: Do you think Atlético de Madrid has a chance of winning the Liga BBVA?
Guerra: I think they have a genuine chance. Nobody expected them to hold on for so long, but it is a very professional and hard-working team. So far it has held its own besides Barça and Madrid and I think it will stay there until the end because it is a very difficult side to beat and can hurt you easily. This will make it a really exciting Liga BBVA.

LFP.es: In your career you have won promotion to the Liga BBVA twice, with Levante UD and Valladolid. What are your thoughts on the Liga Adelante and what memories do you have?
Guerra: It is a very difficult competition, winning five matches in a row does not get you anywhere because it is so tight and the first team can lose to the last. There are always opportunities to enter the playoffs until the end and that is the great thing about the competition. Any team's objective can be at stake right until the end and it makes it very exciting to play in. You learn to compete, you grow as a player and it helps you as a player. I played there for many years and experienced promotion and relegation. Promotion from the Liga Adelante to the Liga BBVA is amazing and really gratifying because of all the hard work that has been done.