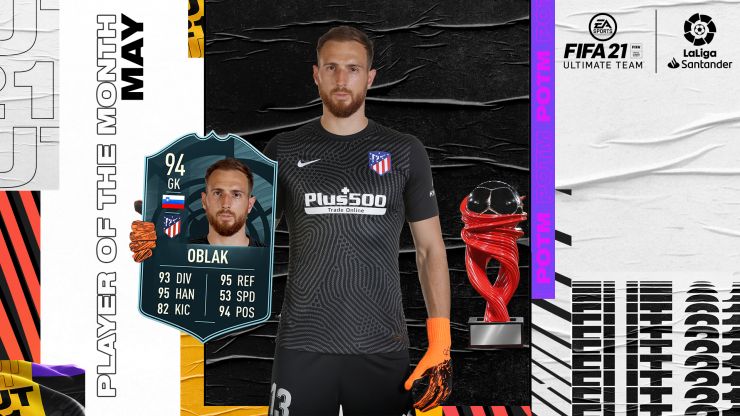 Jan Oblak named LaLiga Santander Player of the Month for May

The Atletico Madrid goalkeeper has won this award after making a key contribution in a month which was fundamental to his side's battle to claim the LaLiga Santander title.

Jan Oblak has picked up the LaLiga Santander Player of the Month Award for May after a string of fantastic performances which confirmed just why he is one of the key cogs in 'Cholo' Simeone's machine, completing every single minute in the competition and playing at the very top of his game.

The Slovenian has made himself almost impossible to beat and ends the campaign as the keeper to have conceded the fewest goals. His net has only been breached on 25 occasions and he has made a total of 103 saves, 18 of them this month alone.

He managed to keep clean sheets on two of the five matchdays this month, specifically in the win over Elche CF and in the game against FC Barcelona. These are just two of many this campaign, the shot-stopper proving impenetrable in a total of 18 out of the 38 games which he has played this season. He has played a key role in Los Rojiblancos going five games unbeaten to finally propel his side to glory and celebrate finishing this season as champions.

Oblak came out on top in the voting ahead of the other candidates for the award: Borja Iglesias, Carlos Soler, Casemiro, Gerard Moreno, Joselu and Santi Mina.