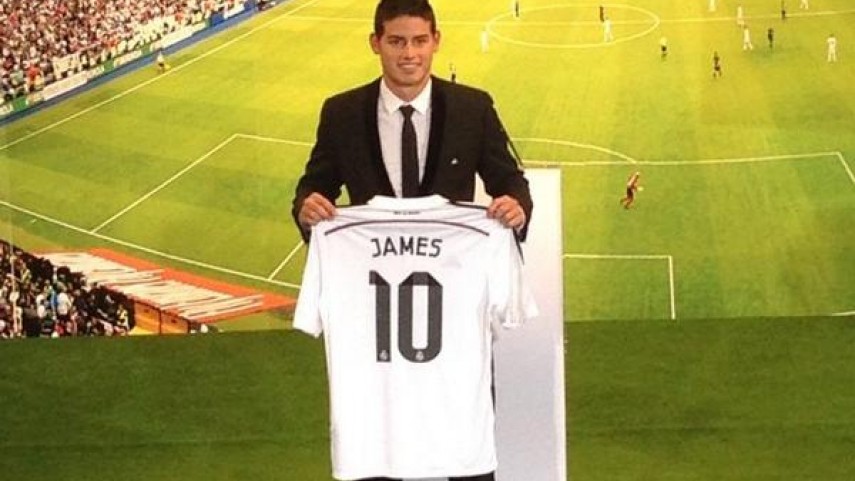 The Colombian has signed a deal to keep him with the Whites for the next six seasons and he will be presented today at 20:00 CET in the Santiago Bernabéu.

Real Madrid CF have announced the arrival of James Rodríguez for the next six seasons on the club’s official website. The Colombian is the Whites’ second new signing of the summer following World Cup champion Toni Kroos’ arrival. Rodríguez will be presented today, 22 July, at 20:00 CET in the Santiago Bernabéu.

During his excellent FIFA World Cup campaign, Rodríguez expressed his desire to play in the Liga BBVA on a number of occasions. Not only was he awarded with the World Cup Golden Boot thanks to his six goals and two assists during the competition, but he was also named in the tournament’s Dream Team. With credentials like these and still only 23 years of age, the South American will be looking to continue his dazzling career with Real Madrid.

Born in Cúcuta in 1991, Rodríguez started his professional career with Envigado FC. In 2008 he signed for Argentinian side CA Banfield, where he won the First Division Apertura in 2010, and later that year decided to cross the water to play in Europe. He moved to Porto, where he joined up with fellow Colombian player Radamel Falcao. He was part of the UEFA Europa League winning squad during his first season in Portugal. Despite his young age, Rodríguez did not fade away and in 2013 signed for AS Monaco FC. Last season he made 34 Ligue 1 appearances, during which time he scored nine times and provided 12 assists.

Rodríguez is a versatile player who will be able to adapt to Real Madrid’s system in a variety of attacking positions, whether it be out wide or in the centre of the pitch. The Colombian number '10' is a technically brilliant player with an eye for goal, as he showed during the most recent World Cup. In the second round against Uruguay he scored the goal of the tournament by controlling the ball wonderfully with his chest before sending a left footed volley into the top corner.